Ever wonder what it would look like if a thermonuclear device hit your hometown? Yeah, me neither! But let’s pretend for a moment that this is something you’ve actually considered… sicko! There’s an online browser-based program for that! It’s called Nukemap3D, and uses a Google Earth plug in to produce a set of graphics that show the effects of a nuclear weapon on your city of choice.

All you have to do is pick your target, select your favorite thermonuclear device, and you can see an animated mushroom cloud rising over ground zero. The creator was Dr. Alex Wellerstein, an Associate Historian at the Center for History of Physics at the American Institute of Physics in College Park, Maryland, who specializes in the history of nuclear weapons and nuclear secrecy.

Interestingly enough, Wellerstein’s inspiration for developing Nukemap 3D came from his experience of trying to teach about the history of nuclear weapons to undergraduates. As people who had completely missed the Cold War, these students naturally didn’t think about the prospect of nuclear war much, and had little to no cultural association with them.

Events like Hiroshima and the Cuban Missile Crisis were essentially ancient history to them. For him and his wife, who teaches high school, it was always a challenge to get students to relate to these issues from the past and seeing how they related to the present. Specifically, he wanted his students to address the larger issue of how one controls a dangerous technology that others find desirable. 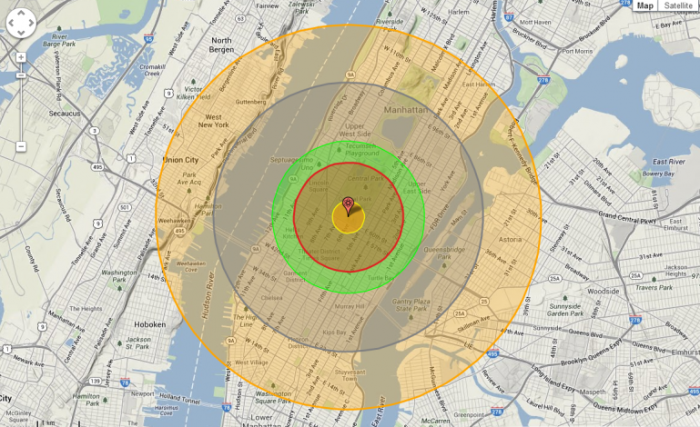 And given how inundated young people are today with technology, he believed an online browser that allowed children to visualize the effects of a nuclear attack seemed just like the thing. The concept originally grew out of his own research to determine the size of the Hiroshima bomb versus the first hydrogen bomb versus a modern nuclear weapon.

After producing a web page with the relevant info in 2012, he began receiving millions of hits and felt the need to expand on it. One of the things he felt was missing was info on additional effects of nuclear blasts, such as radioactive debris that comes down as fallout, contamination that can extend for hundreds of kilometers in all directions, and how this can spread with prevailing winds.

In addition to being a pedagogical tool which can help students appreciate what life was like during the Cold War, Wellerstein also hopes his site could help combat misinformation about modern nukes. All too often, people assume that small devices – like those being developed by North Korea – could only cause small-scale damage, unaware of the collateral damage and long-term effects.

Another use of the program is in helping to combat ideas of “instant apocalypse” and other misconceptions about nuclear war. As we move farther and farther away from an age in which nuclear holocaust was a distinct possibility, people find themselves turning to movies and pop culture for their information on what nuclear war looks like. In these scenarios, the end result is always apocalyptic, and by and large, this is not the case.

In a war where nuclear confrontation is likely, civilization does not simply come to an end and mutants do not begin roaming the Earth. In reality, it will mean mass destruction within a certain area and tens of thousands of deaths. This would be followed by mass evacuations of the surrounding areas, the creation of field hospitals and refugee camps, and an ongoing state of emergency.

In short, a nuclear exchange would not means the instantaneous end of civilization as we know it. Instead, it would lead to an extended period of panic, emergency measures, the presence of NGOs, humanitarian aid workers, and lots and lots of people in uniform. And the effects would be felt long after the radiation cleared and the ruins were rebuilt, and the memory would be slow to fade.

Basically, Wellerstein created Nukemap 3D in the hope of finding a middle ground between under exaggeration and over exaggeration, seeking to combat the effects of misinformation on both fronts. In a nuclear war, no one is left unaffected; but at the same time, civilization doesn’t just come to an abrupt end. As anyone who survived the horrors of Hiroshima and Nagasaki can attest, life does go on after a nuclear attack.

The effects are felt for a very long time, and the scars run very deep. And as those who actually witnessed what a nuclear blast looks like (or lived in fear of one) grow old and pass on, people need to be educated on what it entails. And a graphic representation, one that utilizes the world’s most popular form of media, is perhaps the most effective way of doing that.

In the meantime, be sure to check out Nukemap 3D and see exactly what your hometown would look like if it were hit by a nuclear device. It’s quite… eye-opening!