When it comes to building the homes, apartment blocks and businesses headquarters of the future,  designers and urban planners are forced to contend with a few undeniable realities. No only are these buildings going to be need to be greener and more sustainable, they will need to be built in such a way that doesn’t unnecessarily burden the environment.

Currently, the methods for erecting a large city building are criminally inefficient. Between producing the building materials – concrete, steel, wood, granite – and putting it all together, a considerable amount of energy is expended in the form of emissions and electricity, and several tons of waste are produced.

Luckily, there are many concepts currently on the table that will alter this trend. Between using smarter materials, more energy-efficient design concepts, and environmentally-friendly processes, the future of construction and urban planning may someday become sustainable and clean.

At the moment, many such concepts involve advances made in 3-D printing, a technology that has been growing by leaps and bounds in recent years. Between anti-gravity printers and sintering, there seems to be incredible potential for building everything from settlements on the moon to bridges and even buildings here on Earth. 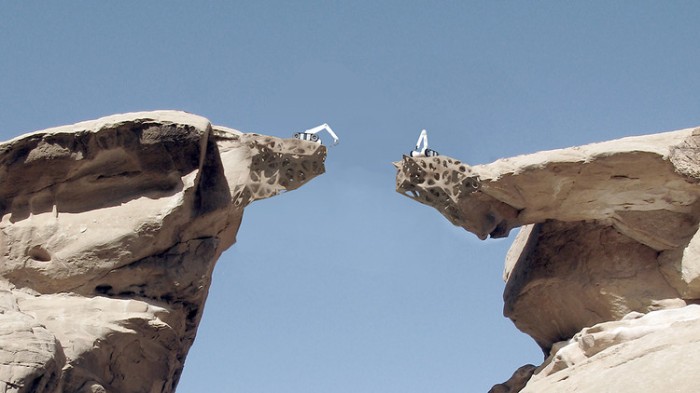 One case in particular comes to us from Spain, where four students from the Institute for Advanced Architecture of Catalonia have created a revolutionary 3-D printing robot. It’s known as Stone Spray, a machine that can turn dirt and sand into finished objects such as chairs, walls, and even full-blown bridges.

The brainchild of Anna Kulik, Inder Prakash, Singh Shergill, and Petr Novikov, the robot takes sand or soil, adds a special binding agent, then spews out a fully formed architectural object of the designers’ choosing. As Novikov said in an interview with Co.Design:

The shape of the resulting object is created in 3-D CAD software and then transferred to the robot, defining its movements. So the designer has the full control of the shape. 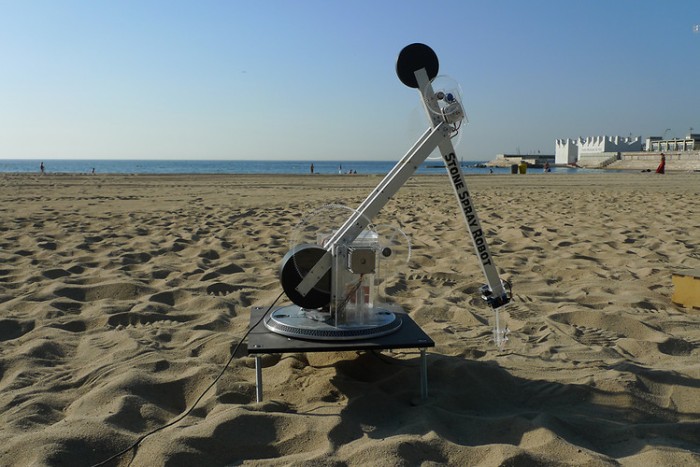 So far, all the prototypes – which include miniature stools and sculptures – are just 20 inches long, about the size of a newborn. But the team is actively planning on increasing the sizes of the objects this robot can produce to architectural size. And they are currently working on their first full-scale engineering model: a bridge (pictured above).

If successful, the robot could represent a big leap forward in the field of sustainable design. Growing a structure from the earth at your feet circumvents one of the most resource-intensive aspects of architecture, which is the construction process.

And speaking of process, check out this video of the Stone Spray in action:


At the same time, however, there are plans to use biohacking to engineer tiny life forms and even bacteria that would be capable of assembling complex structures. In a field that closely resembles “swarm robotics” – where thousands of tiny drones are programmed to build thing – “swarm biologics” seeks to use thousands of little creatures for the same purpose.

MIT has taken a bold step in this arena, thanks to their creation by the Mediated Matter Group that has rebooted the entire concept of “printed structures”. It’s called the Silk Pavilion, a beautiful structures whose hexagonal framework was laid by a robot, but whose walls were shell was created by a swarm of 6,500 live silkworms.

It’s what researchers call a “biological swarm approach to 3-D printing”, but could also be the most innovate example of biohacking to date. While silkworms have been used for millennia to give us silk, that process has always required a level of harvesting. MIT has discovered how to manipulate the worms to shape silk for us natively.

The most immediate implications may be in the potential for a “templated swarm” approach, which could involve a factory making clothes just by releasing silkworms across a series of worm-hacking mannequins. But the silkworms’ greater potential may be in sheer scale.

As Mediated Matter’s director Neri Oxman told Co.Design, the real bonus to their silkworm swarm its that it embodies everything an additive fabrication system currently lacks.

It’s small in size and mobile in movement, it produces natural material of variable mechanical properties, and it spins a non-homogeneous, non-woven textile-like structure.

What’s more, the sheer scale is something that could come in very handy down the road. By bringing 3-D printing together with artificial intelligence to generate printing swarms operating in architectural scales, we could break beyond the bounds of any 3-D printing device or robot, and build structures in their actual environments.

In addition, consider the fact that the 6,500 silkworms were still viable after they built the pavilion. Eventually, the silkworms could all pupate into moths on the structure, and those moths can produce 1.5 million eggs. That’s enough to theoretically supply what the worms need to create another 250 pavilions.

So on top of everything else, this silkworm fabrication process is self-propagating, but unlike plans that would involve nanorobots, no new resources need to be consumed to make this happen. Once again, it seems that when it comes to the future of technology, the line between organic and synthetic is once more blurred!

And of course, MIT Media Lab was sure to produce a video of their silkworms creating the Silk Pavilion. Check it out: