Somewhere in Vancouver, William Gibson must be smiling smugly to himself. Less than an hour ago, yours truly – usually the last to hear about recent events in pop culture – was made aware that Tupac, through the magic of a holographic projector, made a comeback appearance at Coachella. This, naturally, triggered a massive reaction on twitter and just about every other form of social media. One can expect that this will add a whole lot of impetus to the conspiracy theory that states that Tupac is still alive and releasing albums that contain clues that he faked his death. In fact, there are already sites going up that are claiming that this act wasn’t an act. But for the most part, no one was fooled.

Not that they were meant to be. The hologram, despite the advanced technology behind it and the obvious skills of the technicians, looked very much like a hologram.

From the side, it looked 2-dimensional, was pretty translucent, and when it moved, the feet seemed to disappear for a few seconds at a time. But what was astounding was just how interactive the hologram was. Performing alongside headliners Dr. Dre, Eminem and Snoop Dogg, the hologram not only performed some of Tupac’s greatest hits with these veteran rappers, it also interacted with the crowd and seemed to be saying things that weren’t taken from old footage. This would imply that the hologram was not simply a recording, but a dynamic thing that the techs had programmed to act like the real-life version. Pretty cool huh? 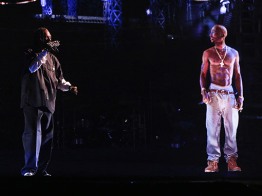 Of course, I mention William Gibson because it was he who predicted this sort of thing. In his 1996 post-cyberpunk novel Idoru, Gibson wrote about the growing popularity of digital personalities in Japan. Apparently, they have many renditions of the Tupac hologram there, virtual beings who sing, dance, and even go on tour – which is apparently what the Tupac hologram will doing in the near future! But Gibson’s novel went beyond by dealing with a hologram that had achieved sentience. Due to advances in the realm of AI, the Idoru had developed a mind of its own, and was therefore looking for a normal life.

This sort of thing is often explored in science fiction, the line between artifice and real, but usually in the form or robots or cyborgs. But this takes it to a whole new level! Let’s face it, there’s something inherently eerie about holograms isn’t there? Beings of light with no physical presence, they appear as angels or ghosts, which is surely what the techs at Coachella were going for. If they can become real, in the sense that they have independent thoughts and actions, well… who knows? The line won’t be blurred, it will disappear entirely!

Update: Just about every piece of footage from the concert has been pulled due to copyright issues. But here’s a clip from Jimmy Kimmel live where they show a clip or two: