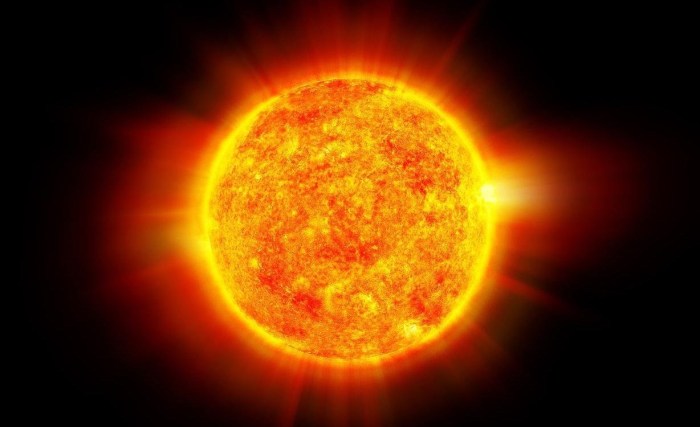 Today, I achieved a personal first and got to see an astronomical phenomena that few people will. While attending an open house event at my local Aviation Museum, I managed to meet up with a man who had set up a stargazing station and was showcasing some serious equipment. After waiting my turn, I got to peer through his special telescope with a sun filter. And what I saw, as the title would suggest, was something truly amazing – sunspots!

As some may know, sunspots have remained something of a mystery to astronomers and philosophers until the Scientific Revolution of the 16th century. It was at this time that Galileo observed them using his own telescope, which he did by projecting the image onto sheets of paper and recording the imperfections in the light.

The discovery was important in helping to disprove the prevailing theory that the Earth was at the center of the universe – aka. the Geocentric theory. Up until this time, European philosophers were living under the impression that the Sun, like all celestial bodies that were believed to orbit the Earth, was a perfect sphere. By showing it to be riddled with imperfections, Galileo placed an additional nail in the philosophical basis of this idea.

This in turn helped pave the way for the acceptance of Copernicus’ theory of a Heliocentric universe. As with his observations that Jupiter had its own set of moons, that the Moon itself did not have a polished crystalline surface, and that Copernicus’ theory resolved numerous logical inconsistencies in the other model, Galileo helped to establish the field of truly scientific astronomy.

Today, I learned that observing sunspots continues to be a difficult thing, since direct observation with a telescope is impossible without sun filter. Not only that, but many people mistake high-magnification for high-power, which in turn leads to images that are not of the best quality. And observing them can by difficult since they go through cycles.

As the kind host of the solar observation explained, and this NASA graph shows, sunspot activity goes through a cycle that repeats every eleven years. As we are currently at the edge of a peek in the cycle, its prime time to get a look at sunspots in the sky. The last time anyone could get a good look was in 2001, and the next opportunity won’t come until 2023.

So I feel pretty privileged, both as a geeky, space-enthusiast and a regular person. If you know someone who has access to a telescope with a solar filter, or just happen to live near an observatory that conducts tours, get out there and spot those surface imperfections. I’m not exaggerating when I say its a rare treat!

As I learned not long ago, today is the 540th birthday of the late great man who definitely proved that the Earth revolved around the sun. And so I thought I’d take some time out of my busy (not so much today!) schedule to honor this great man and the massive contribution he made to astronomy, science and our understanding of the universe.

Given the importance of these contributions, I shall do my best to be pay homage to him while at the same time being as brief and succinct as I possibly can. Ready? Here goes…

Born in Toruń (Thorn), Poland on 19 February 1473, Mikolaj Kopernik was the youngest of four children to be born into his wealthy merchant family. Given his background, Copernicus’ family was able to provide an extensive education for their son, which took him from Thorn to Włocławek to Krakow, where he attended university. In this time, he learned to speak many languages – including Polish, Greek, Italian, German and Latin (the language of academia in his day) – and also showed himself to be adept at mathematics and science.

During this time, he also received a great deal of exposure to astronomy, since it was during his years in Krakow (1491-1495) that the Krakow astronomical-mathematical school was experiencing its heyday. He was also exposed to the writings of Aristotle and Averroes, and became very self-guided in his learning, collecting numerous books on the subject of astronomy for his personal library.

Leaving Krakow without taking a degree, Copernicus moved to Warmia (northern Poland) where he turned to the study of canon law, perhaps in part because of his family’s strong Roman Catholic background. However, his love for the humanities and astronomy never left him, and he seemed to devote himself to these subjects even as he worked to obtain his doctorate in law. It was also during his time in Warmia that he met the famous astronomer Domenico Maria Novara da Ferrara and became his disciple and assistant. 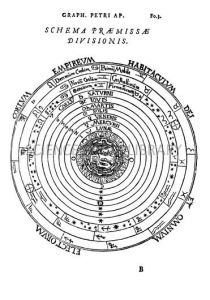 Under Ferrara, Copernicus traveled to Bologna, Italy and began critiquing the logical contradictions in the two most popular systems of astronomy – Aristotle’s theory of homocentric spheres, and Ptolemy’s mechanism of eccentrics and epicycles – that would eventually lead him to doubt both models. In the early 1500’s, while studying medicine at the University of Padua in Italy, he used the opportunity to pour over the libraries many ancient Greek and Latin texts to find historic information about ancient astronomical, cosmological and calendar systems.

In 1503, having finally earned his doctorate in canon law, Copernicus returned to Warmia where he would spend the remaining 40 years of his life. It was here that all of his observations about the movement of the planets, and the contradictions in the current astronomic models, would crystallize into his model for the heliocentric universe. However, due to fears that the publication of his theories would lead to official sanction from the church, he withheld his research until a year before he died.

It was only in 1542, after he had been seized with apoplexy and paralysis, that he sent his treaties, De revolutionibus orbium coelestium (On the Revolutions of the Heavenly Spheres) to Nuremberg to be published. It is said that on the day of his death, May 24th 1543 at the age of 70, he was presented with an advance copy of his book.

Impact and Legacy:
The immediate reaction of the church to the publication of Copernicus’ theories was quite limited. In time, Dominican scholars would seek to refute based on logical arguments and Aquinism, ranging from the positions of planets in the sky to very idea that Earth could be in motion. However, in attempting to disprove Copernicus’ theory, his detractors merely fostered a debate which would provide the impetus for reevaluating the field of physics and proving the heliocentric model correct.

And in time, with the help of such astronomers and mathematicians as Galileo, the debate would come to a head. Using the telescope, a technology he helped pioneer, he was able to demonstrate that the size of the planets during various times in the year did indeed conform to the heliocentric model, and that it was only through distortions caused by observing with the naked eye that made them seem larger (hence, closer to Earth) than they really were.

And although Galileo would eventually be forced to recant and placed under house arrest for his last few years on this Earth, the Copernican system became the defacto model of astronomy henceforth, and would help to launch the Scientific Revolution whereby several long-established theories would come to be challenged. These included the age of the Earth, the existence of other moons in our Solar System, Universal Gravitation, and the belief in the universe as a giant, rationalized clockwork mechanism.

Final Thoughts:
Naturally, there are those purists who would point out that he was not the first to propose a heliocentric planet system. In fact, the concept of a universe with the sun at the epicenter dates back Ancient Greece. However, Copernicus would be the first astronomer to propose a comprehensive model, which would later be refined by Galileo Galilee.

Other purists would point out that his system, when he developed it, had numerous observation and/or mathematical flaws, and that it was only after Galileo’s observations of the heavens with his telescope that his theories were made to work. But it is precisely because he was able to realize the truth of our corner of the universe, sans a reliable telescope, that makes this accomplishment so meaningful.

In Copernicus’ time, the rigors of the Aristotelian and Ptolemaic models were still seem by the majority of astronomers to be the correct one, regardless of church doctrine or religious bias. In purely mathematical terms, there was little reason to make an intuitive leap and suppose that the great minds on which Scholastic science was based had got it all wrong.

So when it comes right down to it, Copernicus was an intuitive genius the likes of which is seen only once in a lifetime. What’s more, his discoveries and the publication thereof helped bring humanity out of the Dark Ages – a time where learning and the hearts and minds of men were still under the iron grip of the Church – and helped usher in the modern age of science. 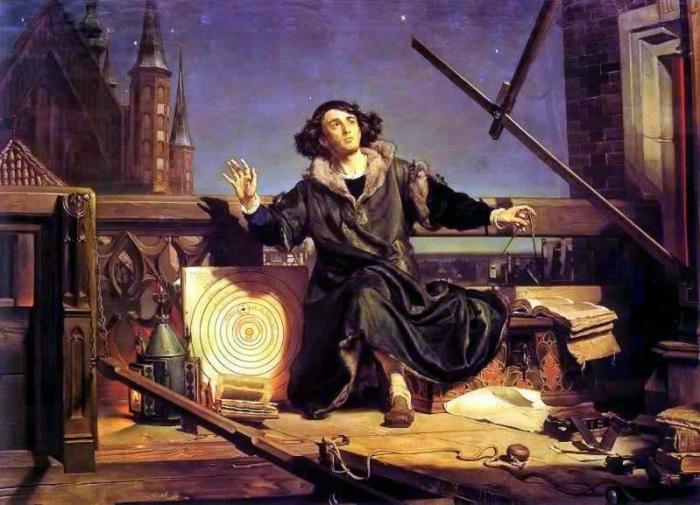 And if I could get a bit polemic for a second, I would like to say that it is unfortunate then that much of what Copernicus helped to overcome is once prevalent in society today. In recent years, long-established scientific truths like Evolution, Global Warming, and Homosexuality have being challenged by individuals who claim they are lies or merely “theories” that have yet to be proven. In all cases, it is clear what the agenda is, and once again faith and God are being used as a justification.

In fact, despite the monumental growth in learning and the explosion in information sharing that has come with the digital age, it seems that misinformation is being spread like never before. Whereas previous generations could always blame ignorance or lack of education, we few who are privileged enough to live in a modern, secular, democratic and industrialized nation have no such excuses.

And yet, it seems that some decidedly medieval trends are determined to persist. Despite living in a time when the vast and infinite nature of the universe is plain to see, there are still those who would insist on making it smaller just so they can sleep soundly in their beds. As if that’s not enough, they feel the need to villify that which they don’t understand, or openly threaten to kill those who preach it.

Sorry, like I said, polemic! And on this day of days, we can’t help but remember the lessons of history and how so often they are ignored. So if I might offer a suggestion to all people on this day, it would be to choose a subject they feel uninformed about and learn what they can about it. And do not trust just any source, consider the built-in biases and political slants of whatever it is you are reading. And if possible, go out and hug a scientist! Tell them you accept them, do not fear what they have to say, and will not be sending them death threats for doing what they do.