I’m sure many of us recall what it was like saying goodbye to Futurama for the first time back in 2003. The final episode opened with its usual title shot and upbeat music, and the caption down at the bottom read “See you on some other channel”. And after six years of reruns on Adult Swim and four direct-to-video movies, that prediction came true.

In 2009, Comedy Central picked up the show and began running new episodes, and all the fans started thumbing their noses at Fox. Once again, the big bad network lost as a show it had canned for unclear reasons (some believed it had to do with Groening being “too liberal” for Fox’s taste) was brought back from exile. And for the next four years, we the fans got treated to new episodes of a favorite series.

And now, for the second time, we say goodbye to Futurama, which aired its last episode less than a week ago on Tuesday, Sept 4th, 2013. Naturally, I’ve been wanting to say something about it, but thought I would hold off until I finished watching the last episode. And now that that’s done, and my feelings are raw, I am free to spit some hot fire!

According to the industry buzz, the decision to discontinue the show was made exclusively by Comedy Central, which announced that it was finished with the series and would not be renewing for an eight season. Meanwhile, Matt Groening has said that he intends to continue with the series and get it picked up by another network, so fans can rest easy in the knowledge that the talent isn’t quitting, it’s was just some dumbass execs that decided to pull the plug! 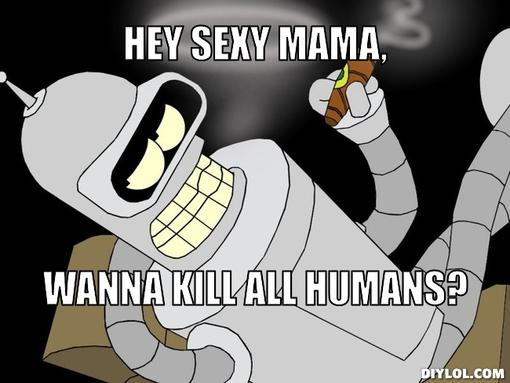 And I for one have to wonder what the hell they are thinking. Who do they think they are, the Fox Network? Do they not recall the lashing those guys got from Groening after they axed his show? In any case, the cast and crew once again chose to go out with a cheeky bang. This time around, the caption words “Avenge Us” appeared at the bottom of the screen as the opening scene began to roll!

Oh, we will, Mr. Groening! We will! In addition, this final episode chose to once again focus on the love story between Fry and Leila. You might recall how last time, the show ended with “The Devils Hands are Idle Playthings”, where Fry composes for Leila a holophoner song and the episode ends with an image of them kissing, holding hands and walking into the distance. Well to up the ante, this episode ended with Fry and Leila spending a lifetime together, and then going around for another pass! (sniff, sniff)

And in the meantime, I want to do a tribute piece for this awesome series and I’d like people’s help to make it happen. Since we collectively make up the fan community , I’d like to know from all of you what you thought was great about this show. What were the best episodes? What were the funniest moments? What were the saddest moments? Who were the greatest characters? And who do you think will pick it up for its third run?

Drop me a line and let me know what you think. And I think I speak for us all when I “say goodbye for now” to Futurama for the second time! Perhaps it’s denial, or just confidence in the show itself, but I got a feeling we’ll be seeing it again soon! 🙂