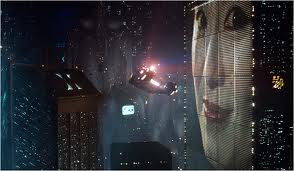 Third on the queue, the sci-fi and cult classic Blade Runner! Thank God too, since my first two reviews were both about movies I really didn’t like. While it’s fun to bash bad movies, it can leave a bad taste in your mouth. Good movies are like Listerine that way, they cleanse the critical palette, renew your faith in the visual medium. And as promised when I first decided to do reviews, movies based on books would receive special mention, especially movies that differed greatly from the books that inspired them. Truth be told, I had Blade Runner in mind when I made that statement, and a number of other Philip K Dick stories that went on to become films. In fact, the movies Minority Report, Paycheck, Impostor, The Adjustment Bureau, and Screamers were all movies based on Dick’s stories (which I plan to review soon enough!). And in every case, the films were quite different from the original works. You might even say it’s the Philip K Dick curse: to see your novels and short stories inspire film adaptations, but only after you’ve died and always with big changes! And without a doubt, Blade Runner was the most extreme case of this curse at work. In terms of plot, story, and especially tone and setting, the movie was vastly different from the novel. I’d say shame on the people who made this movie, but the truth is, it kind of worked in their favor…

(Background—>)
A few years back, I finally got around to reading Do Androids Dream of Electric Sheep? which was the original title of the novel that would be the basis for the Blade Runner movie. Having already seen the movie, I found the novel quite surprising, and at times, downright odd. But it’s message and style eventually won me over, as did the comical and satirical aspects that Dick made use of. Whereas the movie was set in a Los Angeles of the future – a noire, dystopian crowded cityscape marked by flying cars and massive video advertisements on the sides of skyscrapers – the novel takes place in a relatively depopulated post-apocalyptic LA where the only people who remain are those who are either too poor or don’t have the requisite IQ levels to get a pass off-world. These colonies get a passing mention in the movie in the form of ads being broadcast from flying zeppelins, but the focus is overwhelmingly on life in the city. Another major difference is the lack of satirical consumer goods that were in the original novel: emotional dialers that people use to set their moods and empathy boxes that are basically TV’s that provide an interactive emotional experience. Both were touches of genius, hilarious but also very interesting in how they help to advance the story.

But by far, the greatest difference between the novel and the movie was in terms of theme. Whereas the novel was very much concerned with the fine line between artifice and authenticity (the robots representing the former), the movie depicted the Replicants (the AI’s) as tragic figures who are given the gift of life, only to have it taken away in the form of slavery, four-year lifespans, and “retirement” (i.e. execution) if they break the rules. So really, the book was a touch more simple in how it perceived machines: as cold and heartless, characterized by false animals, false humans, and nuclear arms. The movie depicted this in more complicated terms, blurring the lines between artificial and authentic, human and machine. Whereas in the book we don’t much care about the Replicants, in the movie, they are about the only characters we sympathize with.

(Content—>)
The movie opens on the city of Los Angeles in the future, circa 2019, where a Blade Runner detective has gone to the Tyrell Corp (the maker of Replicants for off-world use) to issue a Voight-Kampff test to one of the employees. This test, we soon learn, measures emotional responses and is the only way to tell the difference between a Replicant and a human. This is because the latest models (known as Nexus 6’s) have surpassed humans in all aspects, but still have a hard time mimicking human emotions. The Tyrell Corporations motto is “more human than human” for a reason, you see. And for reasons of legality that are mentioned in the movie’s preamble, no Replicants are allowed on Earth, so anyone suspected of being one is required to take the test and then “retired” if they fail. Upon realizing why he’s being tested, the employee shoots the Blade Runner and escapes. Guess he failed!

We then move to the character of Rick Deckard (played by Harrison Ford), who is enjoying a bowl of noodles at a street vendor when a bunch of LA police men approach him and demand he come with them. In this scene, we are given a ground level view of the noire city, as well as a taste of cityspeak. This lingo is the language of the street in the Blade Runner universe, a mishmash of various tongues which is illustrated beautifully by the character of Gaff (played by Edward James Olmos). Deckard goes with them and is told by his old chief that he’s needed again, and despite his reluctance, he takes the job. As his boss says, “you’re not cop, you’re little people!”, meaning he really has no choice in the matter. What follows is an admittedly expository scene, but a totally justified one, where we learn who the “bad guys” are as well as some other pertinent facts. For example, we learn that in addition to their difficulty approximating human emotions, Nexus 6’s also have a four year lifespan that ensures that they will never be able to overcome this flaw. Too much time, too many memories, and they might become totally indistinguishable from the rest of us. Spine tingly!

Afterward, Deckard goes to the Tyrell corp to meet the CEO and learn what he can from them. Sidenote: I could be wrong but I think the set designers got an award for the design of this one building. Part sky scraper, part Ziggurat, totally awesome! Here, we meet not only Tyrell himself, but a Replicant named Rachael (played by Sean Young). She represents a new breed of machine specially created by Tyrell to test out a new idea: giving Replicants memories so they’ll have an easier time dealing with emotions. After running the Voight-Kampff test on her, Deckard is both intrigued and frightened by her, a feeling that haunts him for the rest of the movie, and that I believe is meant to represent the love-hate relationship humanity has with technology. What is also interesting is that she doesn’t yet know that she’s a machine, but once the test is done, she overhears Deckard talking to Tyrell and is shattered by the news.

The movie then splits between the Replicant party, led by a unit named Batty (Rutger Hauer) who is trying to find the men most directly responsible for their creation, and Deckard who is trying to find the Replicants and determine why they came to Earth in the first place. In between, there are the scenes that catalog the budding romance between Deckard and Rachael, who herself seems to be torn between her attraction to Deckard on the one hand, and disgust over what he does. This part of the story, more than anything, helps to illustrate the blurred line that exists between artificial and real. While a relationship between the two of them would certainly be considered taboo, neither of them can resist the allure of the other. Over time, Rachael appears to make peace with the fact that she is a machine, and Deckard seems to get over it as well (wink wink!)

Ultimately, Batty and what is left of his companions (because Deckard keeps killing them), make their way to Tyrell himself. Their whole purpose, we learn, was to find a way to extend their lives. What follows is, in my opinion, one of the best scenes in cinematic history. In the course of a very civilized conversation, Batty is told that there is no way to extend his life, and never was. His hopes, and everything they did in order to get to Earth and find Tyrell, were therefore in vain. Tyrell tries to comfort him by telling him that “the candle that burns half as long burns twice as bright.” He further tells him to let go of whatever guilt he harbors for all the things he did to get to Earth and see him, that he should “revel in his time”. But, overcome by anger and grief, Batty kills Tyrell and escapes from the building. One of the things that makes this scene so good is the fact that you genuinely get the feeling that a sort of father-son dynamic (or that of a man meeting his God) is taking place between them. In addition, you can feel the pain being exuded by Hauer as he kills Tyrell. Obviously it pains him to murder his “father”, but he’s got nothing to lose and just needs someone to blame for the fact that he’s going to die and is helpless to do anything about it.

Shortly thereafter, a confrontation ensues between Deckard and Batty at the Replicant’s hideout. And in spite of the fact that Deckard has now killed all his companions and he is poised to deliver the death blow, Batty chooses instead to save his life. His final scene, as he sits half-naked in the rain holding a dove, are yet another example of cinematic genius. “I’ve seen things you people wouldn’t believe…” he says, the rain dripping from his face. “Attack ships on fire off the shoulder of Orion. I watched C-beams glitter in the dark near the Tannhauser gate. All those moments will be lost in time… like tears in rain… Time to die.” So sad, even Harris Ford shed tears, and he’s fricking Han Solo and Indiana Jones! The police then show up, Gaff let’s him know that his girlfriend’s secret is out, but that he left her alone. As he says, “It’s a shame she won’t live. But then again, who does?” Whether or not he’s referring to the fact that she will eventually be hunted down, or to her four year lifespan, is still a bit of a mystery to me. But in either case, by the end, Deckard is finished with being a Blade Runner and runs off with Rachael, finding a measure of redemption through his relationship with her.

(Synopsis—>)
Blade Runner was panned by some critics who didn’t like the pacing of it, and my own wife remarked the first time she saw it that she felt a little let down. But of course she, and I imagine many of those critics, were expected an action movie and not the cinematic tour de force that it was. With a name like Blade Runner, you kinda sorta think it’s going to be an action flick. But upon seeing it for a second time, her feelings changed and she saw the depth it undeniably has. And despite doing poorly at the box office, time has been very good to this movie, elevating it to the status of a cult classic and an example of cinematic gold. In fact, over the years it has appeared on numerous top 100 lists, not only as one of the best sci-fi movies of all time, but also one of the best movies period. Who am to argue? And hell, why would I even want to? I love this movie!