You ever see a trailer and think, “holy crap, that is the worst violation of my childhood that I will ever watch start to finish”? That was my feeling when watching the latest TMNT trailer, which was released late last month. Despite the abundant hints that this movie is going to be another Bay-backed atrocity, complete with racist caricatures, sexist portrayals, eye-candy visuals and stupid dialogue, I still felt kind of nostalgic seeing it.

And there were some additional hints that told me this movie was going to totally suck. For starters, it is strongly implied yet again that the Turtles were created as some sort of covert project. It’s also strongly implied that “The Shredder” – the main antagonist in the TMNT universe – was a similar creation. Hell, they even go as far to say that he’s a damn robot with Wolverine-like retractable claws. What can I say to that except… NOOOOOO!

But like most fans who grew up with the Turtles, I was never looking to this movie to provide any kind of faithful reboot. In fact, when I heard Bay was doing a relaunch of the franchise, I believe I just rolled my eyes and filed it in the “could care less” category. So while I might get around to seeing this, I do not imagine for one second that I am expecting anything from it other than utter amusement. 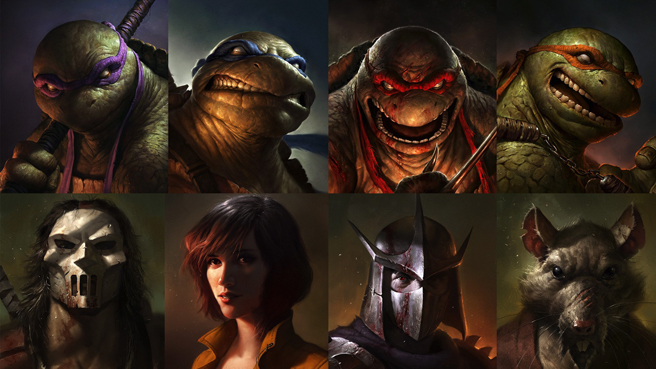 As a kid, I was a big fan of the Eastman and Laird TMNT comics. As a youngster who grew up in the Star Wars and Karate Kid era, and who loved science fiction and RPGs, my love of this franchise was pretty much a given from the get go. And over the years, I and many other adolescents were excited to see these characters adapted to television and the big screen, with mixed results. And now, true to form, Michael Bay has chosen to tap into this latest reservoir of nostalgic energy for the sake of profit.

And after a few years of development and lots or preliminary hype (mainly that the script sucked and Bay claiming it wasn’t his fault),  Paramount Pictures has announced the movie’s release. It will be premiering on August 8th, 2014 (just in time for the summer blockbuster season) and will star Alan Ritchson, Jeremy Howard, Pete Ploszek, Noel Fisher, Will Arnett, Danny Woodburn, William Fichtner, and Megan Fox in the role of investigative reporter April O’Neil.

And I’m just assuming (based on past experience with Bay movies) that the turtles themselves will all be terribly cheesy and borderline racist caricatures, with at least one sounding very much like a punchy, sass-talking black dude. Also, is anyone surprised to see Fox here? Didn’t she burn all her bridges with Bay after she compared him to a Nazi? Just saying… Enjoy the trailer:

Guess what? In this new age of reboots, relaunches and reimaginings, it seems that not a single cult classic is immune. Case in point, the eponymously named sequel Riddick, which is set for release in early September of 2013. Though there are minimal hints provided concerning the plot of this third installment, it seems clear at this point that Riddick is once again on the run from mercenaries and ends up on a planet teeming with hostile life.

Going back to their origins, I take it? Personally, I would prefer seeing what happened after Riddick took control of the entire Necromonger army. And if some tells me this is what followed, i.e. he chose to ditch all that and go back on the run, I’ll totally write this movie off! You can’t tell me he likes being hunted by mercs and living hand to mouth THAT much! I mean there’s recidivism and then there’s just plain dumb!

Oh dear. It seems that Disney, not content to let other movie magnates have all the fun, will be launching (no pun) a reboot of its own. Yes, The Rocketeer, that kitsch, feel good movie about a guy who finds a rocket pack and becomes a super-hero, is getting remade for a new generation.

Personally, I got nothing against the original. Families had to have some kind of inoffensive option for super-hero movies back when Spiderman didn’t exist and Batman was still a bit Gothic for children to watch. But why does it need to be remade? Wasn’t the last one enough?

But then again, that’s a can of worms which myself and many smarter people besides have already opened. If you pull one thread in this giant tapestry known as reboot/remake/relaunch fever, it all comes tumbling down!

Luckily, some of the folks over at Vimeo made this hilarious video of what The Rocketeer would look like if it had been made into a Pixar movie. I can’t help but wonder if they have the right idea here. Seriously, when was the last time Disney ever did anything great that was live action?

And just to poke fun at Disney, here’s a musical clip from Family Guy where The Rocketeer didn’t do so well (at 1:24), not to mention Michael Jackson. Geez, MacFarlane, talk about kicking a dead horse!

Oh no, not another 80’s relaunch. And just when it seemed that this summer couldn’t possibly OD any more on 90’s relaunches! But, all things considered, I think this is one that might actually be worthwhile, and which I myself could be persuaded to see.

In any case, though the details are a bit sketchy, the movie is scheduled for launch in 2013 and will star Joel Kinnaman as Alex Murphy/Robocop. Additional cast include Gary Oldman, Samuel L. Jackson, Abbie Cornish (from Suckerpunch) and Hugh Laurie (of House fame).

In addition, the trailer seems to be taking the same approach as Scott did with his build-up to Prometheus. Rather than show any scenes from the film itself, the preview takes the form of an advertisement by Omni Consumer Corp (OCP), the evil mega-corporation that is responsible for building Robocop and controlling Old Detroit.

It’s quite interesting, and I am reasonably intrigued as to see how the remake chooses to deal with the original’s various themes, such as cybernetics, corporate domination, urban decay and a society numbed by violence and distracted by mindless entertainment.