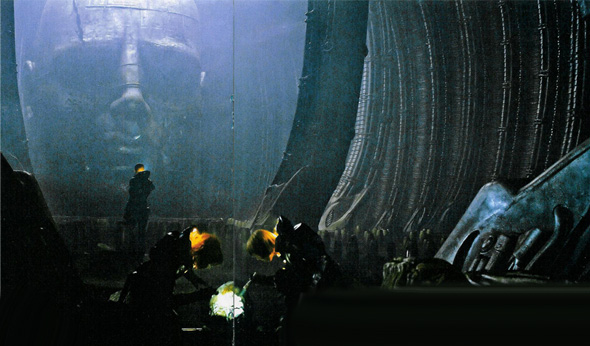 Recently, I came across the lovely article entitled “Don’t f—- around with gods” from the Sydney Morning Herald. The subject was director Ridley Scott’s new movie, Prometheus, which is currently in post-production and set to be released in June of this year. As I’m sure everyone is aware by now, this movie is a return to the universe of Alien, a franchise which Scott began in earnest 30 years ago. Originally thought to be a prequel, Scott has since revealed that this movie is in fact a sort of standalone movie which explores the concept of Exogenesis – the idea that life came to Earth or other planets from an extra-solar source.

Although linked to the original Alien movie in that it deals with the same derelict that the crew of Nostromo encountered, the story is far more concerned with the alien race known as the Space Jockeys than the xenomorphs themselves. Or at least, that appears to be the focus. I’m sure the xenos make an appearance, and probably end up screwing everybody over, as is there tendency! But mainly, Scott emphasized that the plot, as suggested by the title, has to do with the discovery of powerful, dangerous things. When one encounters alien technology, the specter of the bound god who gave fire to humanity can’t help but be resurrected. It’s just timeless like that!

In the course of the interview, Scott also spoke extensively about his reasons for getting into science fiction in the first place. I have to say that I loved his answer: “Science fiction is a wonderful – sorry about the pun – universe for – again, another much overused word – creativity. It’s an arena where anything goes… The opportunity presents itself to fundamentally do anything you want, providing that you draw up a rule book in the first place. You’ve got to draw up the rules of your drama and within that universe you’ve got to actually stick to your own rule book. I think that’s what’s happening – we’re not drawing enough rules up when we do materials. It feels like writing a book…”

Wow. It’s wonderful when you see words that you yourself have said put into the mouths of true veterans! If I was to make a list of directors whom I admire for their creativity and vision over the years, Scott would be tied with Stanley Kubrick for first place! With movies like Alien, Blade Runner, Black Hawk Down and Gladiator to his credit, I got to say that I’m pleased as punch that he and agree on two fundamental precepts. One, science fiction is a great realm for creativity and inventiveness due to the fact that the only limitations are those of the author’s imagination. And two, that it’s best to have a detailed game plan worked out in advance. This is what sunk Lucas’ prequels people! Always know where you’re going in advance and try to stick to the plan. Otherwise you wind up with contrived plot twists and forced situations. Trust me, I know!

Another great thing to read was Scott’s indictation that Prometheus wouldn’t be a massive CGI fest. Something which set Cameron’s Aliens apart from the dubious Avatar was the use of real live actors in suits or animatronics instead of digital creations. Granted, this was done in an age when CGI wasn’t available, but those who followed in Scott and Cameron’s footsteps understood the value of shooting things this way. If there was one thing AVP did right, it was the use of costumed actors and real sets rather than blue screens and generated images.

Having set the precedent, I think it’s only right that Scott remain true to this heritage. After all, his environments, especially that of the Space Jockey Ship, were known for their dark, gritty, grimy look, something which was very… Lovecraftian! Try doing that with digital effects, it just doesn’t work! CGI might be great for creating visuals, but the textures are always too clean and sterile. Or in the case of Avatar, too cartoony! And actors are far more convincing when they’re interacting with a real person, or even a robotic alien, than a standing stick or a tennis ball on the end of a string! 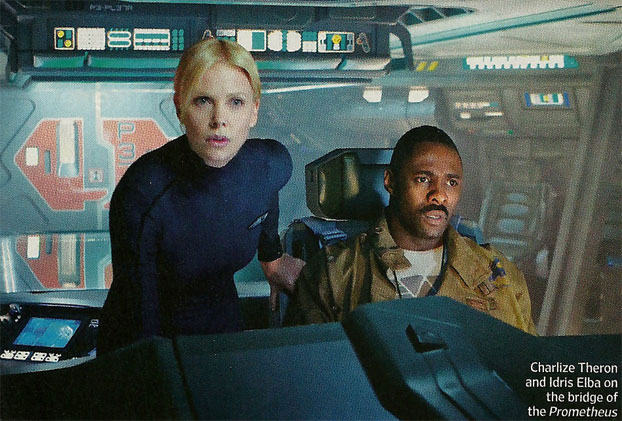 In any case, here’s the link to the article. It’s a good read, and definitely for fans of Scott, the Aliens franchise, and just sci-fi in general!
http://www.smh.com.au/entertainment/movies/dont-f-around-with-gods-20120403-1wb3s.html#ixzz1rwMj1yQD

2 thoughts on “Prometheus and an interview with Ridley Scott”