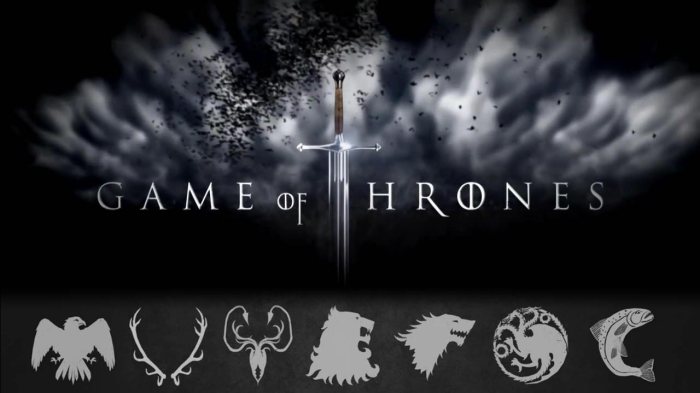 Morning folks, welcome to another work week, and another episode review of GOT! This week, since I’ve got a bit more free time on my hands, I thought I’d get to this review early and avoid what happened last time. I mean, people don’t need to wait til Thursday to hear about a show they watched on Sunday right? Yeah, mea culpa. But its a new week and a new episode, and the mid-season one at that!

Naturally, I was eager to see this week’s episode, since the story was now in full swing and the big plot points were being addressed. For example, Daenerys campaign to raise an army of free people from the ruins of the slave capitol of the world. This was one of the best parts of book III, so I’m quite interested to see how they go about illustrating it. And of course, there’s also Robb Stark’s growing problems, which were not dealt with last time.

But biggest for me was the plot thread hinted at in the title. After weeks of having John Snow’s story only touched on, and with him not even making an appearance last week, I was happy to see that this episode would be dealing with his story. Not only is it too one of the most important in the third book, it is perhaps the most personal and emotionally involved.

Taken together, the promise of seeing all these threads further developed left me feeling eager and antsy…

The episode opens in the Riverlands, where Beric Dondarrion prepares for trial by combat with Sandor Clegane. After setting his sword ablaze in true R’hllorian fashion, Beric fights Sandor, who’s naturally afraid of his flaming blade. However, Sandor manages to survive the bout and lands his sword in Beric’s shoulder, killing him. But the death doesn’t last long, as Thoros issues a prayer to the Lord of Light and resurrects Beric yet again. Found innocent by trial of combat, Sandor is released…

Later on, Arya learns that Gendry will be staying behind with the Brothers while she is taken to Riverrun and handed over to her brother. Afterwards, she learns from Beric that he has died many times and been brought back by Thoros, and wonders if her father could be resurrected in the same way.

In Riverrun, Robb is faced with yet more problems as Lord Karstark take matters into his own hands and executes the Lannister captives. Though he is encouraged to take him as a hostage in order to ensure the continued loyalty of House Karstark, he decides to execute him and swings the sword himself. He loses the Karstarks as allies and laments how unity has broken down in his army. However, he knows he can still march on Casterly Rock, provided he can rebuild his alliance with House Frey.

In Harrenhal, Vargo Hoat delivers Brienne and Jaime Lannister to Roose Bolton. Being merciful, he chooses to let Jaime know that his family prevailed in the siege of King’s Landing and sends him to get the care he needs for his wound. Afterward, he finds Brienne in the baths and shares a tub with her. After agreeing on a truce, he explains to her why it is he killed King Aerys, thus earning him the name “Kingslayer”.

Moving to the north, we see John with his newfound Wildling companions, sharing what information he can with Tormund about the Wall’s defenses. Afterward, Ygritte leads him on a bit of a chase and they end up inside a cave, where she undresses for him and tests his loyalties by seeing if he will break his vow of celibacy. He does, and the two are joined in Wildling fashion… a couple of times!

In King’s Landing, Cersei reaches out to Lord Baelish for help in dealing with the Tyrells, while Tyrion reaches out to Lady Redwyne for help with the royal wedding. Sansa gets a chance to see Ser Loras, whom she thinks she will marry. However, Tywin intervenes and decides to wed her to Tyrion. After gloating, Cersei is told she will wed Ser Loras, which sends her into a fit of self-pity.

On Dragonstone, Stannis meets with his wife for the first time in ages. He comes to confess for his indiscretion with Lady Melissandre, but is told that he has done nothing wrong. As his wife is clearly crazed over the loss of her stillborn children, which she keeps in a set of jars, she confesses that she was overjoyed to learn that someone else was able to give him the son he deserved.

Afterward, Stannis meets with his daughter, Shireen Baratheon, who waits in her tower and suffers from greyscale. After learning that Ser Davos, who has always been a friend to her, is in prison for treason, Shireen goes to the dungeons to see him and brings him a book – Aegon the Conqueror. He confesses that he is illiterate, at which point she begins reading it to him and suggest she make a habit of coming to see him.

In Essos, Daenerys army continues to march from Astapor to Yunkai. This gives Ser Mormont and Ser Selmy a chance to discuss the men they’ve served over the years and discuss how best to serve their new queen. But both agree that they are happy to be serving Daenerys now since they believe in her, though it is clear Mormont also holds a torch for her.

Daenerys also addresses her Unsullied officers and asks them to pick their own names and shed their slave names. Their leader, Grey Worm, tells her he will keep that name, as it is lucky. His birth name was the one he had when he was taken as a slave, whereas the one he has now he held when Daenerys set him free.

Summary:
As usual, high and lows in this episode, though I felt it was mainly characterized by highs. For starters, I was glad to finally see John and Ygritte hook up!  Their thread has been sorely neglected so far and I was seriously beginning to wonder if they would ever get around to showing their relationship or not. I was glad to see that they did!

In the third novel, this was not only an important aspect of the plot but the also one of the most gripping and emotionally involved parts of the story. Here, John’s loyalties are being severely tested, and his newfound love for Ygritte was causing him to break his oaths. Of course, he was only doing what Qorin told him to before they were captured, but that didn’t make it any easier for him.

Though that raises something that I’ve found generally unlikeable about their adaptation. In the second season, Qorin did not ask this of John and instead seemed to condemn him for letting Ygritte go, a move which led to their capture. Granted, it seemed obvious he staged their little “fight” to get John into their good books and sacrificed himself, but John was not in the know and is now groping around blindly.

Perhaps they thought this would make his uncertainty and test of loyatlies more genuine, but I think it only complicates matters. Better to have him playing the role of defector and constantly be wondering if he’s doing the right thing than have him vacillating between two camps for real.

Another high point was Jaime’s confession to Brienne of why he killed Aerys. Not only was the scene accurate and lucidly portrayed, it was a testament to Nikolaj Coster-Waldau’s skill as an actor that he managed to pull off Jaime’s torment so well. After years of being a cynical bastard because of how people view him as a man without honor, and having lost his sword hand – his only redeeming feature, in his mind – he is naturally in serious emotional pain and wants redemption. Personally, I thought he captured that here brilliantly.

And of course, the machinations that are going on in King’s Landing. As I’ve said before, the Sansa-Pyter plot has been simplified, since it was Boros Blount who arranged for her escape and Pyter’s involvement not revealed until later. But aside from that, they are capturing the spirit of this point in the story quite well, showing how plotting between houses is causing a general atmosphere of distrust that will threaten to boil over. And for the most part, it’s being conveyed accurately.

And as for Robb’s thread, there is a minor change here which caught my attention. His decision to repair relations with the Freys was not part of some brilliant idea to attack Casterly Rock. It was done out of necessity because his decision to marry Talisa Maegyr was basically a big middle finger to his promise to marry Walder Frey’s oldest daughter. What’s more, its hardly big news that he would plan to attack Casterly Rock, home of the Lannisters.

That was his aim in the book all along. Since it sits west of Riverrun and well north of King’s Landing, he knew he had to have it, since to march past it would expose his entire western flank. A nitpick, I know, but sometimes I wonder why they bother with little changes like these. They kind of seem frivolous and unnecessary, like they are trying to sex up the storyline or something. It’s already well-sexed, believe me! Just tell it and move on…

And to end things happily, I like that they brought in Stannis’s daughter and developed his back story some more. Naturally, its hard to give all the characters their worth in a format like television, especially when adapting something as voluminous as Martin’s series. But they managed to get her and his wife in, and show the kind’s of debilitating and tragic things which have effected their family. Oh, and the way they had his daughter singing the song that Patchface  – her jester, who was important in the books but didn’t make it into the cast of the show – always sung her was a nice touch.

And that was the middle of season three, people! Things are shaping up and we are due for some major action, betrayals and intrigue real soon! Stay tuned because I know for a fact that it’s only getting better from here…