Several scientific subjects have piqued my interest as of late, particularly the ones that relate to the colonization of other planets. And there are plenty of good reasons for this. First off, NASA has been talking at length about a possible Mars mission which will be begin in 2030. Second, the topic is central to the novel my group and I are writing. And third, because it’s what I do. I’m a geek, dammit! Do I really need any other reason?

So in honor of this fertile and increasingly relevant topic, I thought I’d dedicate a post to the science of terraforming and its depiction in popular culture. Like the majority of your more radical ideas, the concept first appeared around the turn of the 20th century. As part of the larger trend of exploring planetary colonization, several historical developments contributed to this phenomena.

Foremost amongst them was the closure of the American frontier by 1900 and the partitioning of Africa in 1905. With the “Age of Discovery” officially over, scientists and dreamers began to look farther abroad for the next place to move to. Refinements in the fields of metallurgy, chemistry, and astronomy also contributed to the idea that planets like the Moon, Mars, Venus, Europa, Ganymede, and even other star systems, could be colonized.

And thanks to the advent of the Space Race, the Apollo missions, and Eco-engineering in the latter half of the 20th century, scientists have begun to take a serious look at terraforming, particularly in regards to Mars. While the practicality, feasibility and affordability are all still being debated, the very fact that there is a serious scientific debate would seem to indicate that it may very well be done someday.

And so, here is a list of science fiction novels from the last century that have explored the idea of terraforming. Once again, I hope you enjoy reading about them as much as I enjoyed researching them, and incorporating some of what they taught me!

This future history by Olaf Stapledon, released in 1930, is the first time that the terraforming of Venus is made in fiction. This was only a fragment of the larger story, which focuses on human evolution over the course of two billions years. Nevertheless, the move to Venus is an intrinsic part of the story involving the “Fifth Men”, who are forced to relocate after Earth becoming uninhabitable.

This occurs only after humanity pushes the local inhabitants to extinction after a protracted war. Afterward, they begin the process of transforming Venus to meet their needs. Like all early accounts, the description was hampered by the fact that knowledge of Venus was highly inaccurate. For example, Stapledon’s account has Venus covered in oceans, rather than the pits of sulfuric acid which are now known to be there.

Farmer in the Sky:

Here we have Robert A. Heinlein’s 1950 story which focuses on a family which has moved to Ganymede, which is in the process of being terraformed. Earth is overcrowded in this day and age, and farming colonies are being established in Jupiter’s moon to help provide much needed food supplies.

The process of creating the new farms is explained in some detail. For example, the topsoil is created from scratch by pulverizing boulders and lava flows, and seeding the resulting dust with carefully formulated organic material. Pressurized housing is erected to ensure that new arrivals are able to adjust, since the atmosphere is not fully breathable. And Ganymede is shielded from Jupiter’s intense radiation by a massive heat shield.

Hints are even given that establish that Ganymede once boasted an indigenous civilization, or was at least visited by one in the past. This includes a working land vehicle that has many legs, essentially a large metal centipede.

The Sands of Mars: 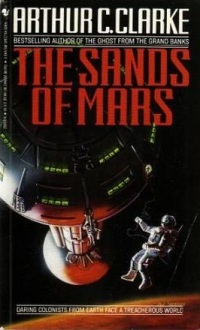 Next we have Arthur C. Clarke’s 1951 novel, which happened to be his first published work. And curiously enough, it is written from the point of view of a famous science fiction author. A case of art imitating life, or art as wish fulfillment? In any case, the setting is a research facility on Mars, which is in the process of terraforming so it will be able to become a self-sufficient colony.

Based on Clarke’s descriptions, this terraforming process (known as “Project Dawn”) involves some rather curious steps. The first is the ignition of the moon Phobos so that it will become a second “sun” for Mars. It will burn for at least one thousand years and the extra heat, combined with the mass production of the oxygen-generating plants, will eventually make the Martian atmosphere breathable for humans.

In many respects, this served as a preview for the plot of 2001: A Space Odyssey and it’s sequel 2010: Odyssey Two (see below).

In keeping with the tradition of sci-fi greats, this next novel was written by Isaac Asimov and first published in 1952. The story is told from the point of view of Scavengers, Mars-born humans who spend their time scouring space for the spent lower stages of spacecraft. This sort of lifestyle, making do with less and toughing things out, is known as the “Martian Way”.

At this point, Mars is still very much dependent on Earth for water shipments, which are used for fuel as well as consumption. Life takes a turn for a worse when an ambitious Earth politician decides to cut of the “Wasters”. In response, the protagonists come up with an ambitious plan, to fly to Saturn’s Rings and tow back an asteroid made of pure ice.

The trip is difficult and takes many months, but the Martian Scavengers manage to snag an asteroid that will supply two hundred years worth of water. This, they begin to use to transform the ecology of Mars, and turn the tables on the Earth government.

Written by Poul Anderson over the course of two decades, the Psychotechnic League refers to a series of novels and short stories that are set in the same universe. Of all these stories, two in particular deal with the terraforming of Solar Planets. In “The Big Rain”, Venus is being terraformed, a process of planetary engineering that takes several centuries to complete.

In “The Snows of Ganymede”, the focus shifts to the Jovian moon where scientists are able convert the planet to the point where it experiences seasons similar to Earth. This, in addition to Mars, Venus and several other Solar Planets, all come together in time to form the Solar Union. Because of Anderson’s realistic description, the term “big rain” became associated with scientific terraforming models.

Arthur C. Clarke’s series, which began with the novelization of the classic film 2001: A Space Odyssey, revolves around the terraforming of Europa by a super advanced race. Known as the Firstborn, these aliens use the Monoliths to travel throughout the universe to foster the development of sentient life. Millions of years after fostering the development of high-order primates on Earth, they shifted their focus to Europa, Jupiter’s ice moon.

Much as in “Sands of Mars”, the process involved the creation of a “second sun”, this time involving Jupiter. In the first novel, the story ends with David Bowman, the only astronaut to survive an exploratory mission to Jupiter after their ships AI (the HAL 9000) malfunction and kills the crew.
When he arrives, he discovers a Monolith in orbit around Europa and disappears without a trace shortly thereafter.

In 2010: Odyssey Two, a second mission is mounted to determine the whereabouts of the first. When the joint US-Soviet mission arrives at Europa, they come to realize that the planet is showing signs of life. They also learn that the Monoliths are in the process of turning Jupiter into a sun so that Europa’s icy surface will evaporate and form an atmosphere, allowing all the life contained underneath to emerge and grow.

In the subsequent novels, Europa is revisited after its transformation is complete. Although sentient life does not appear to be possible, the planet does boast an atmosphere and vast oceans, which teem with sluggish sulfur-based lifeforms. In the end, after the Monoliths are convinced that humanity deserves a reprieve, and they land on Europe to commence building peaceful relations with the Europan life forms.

We finish with the most recent and profound example of all, the Mars Trilogy by Kim Stanley Robertason. The trilogy’s three works – Red Mars, Green Mars, Blue Mars – all focus on the ongoing efforts to transform Mars from an arid, hostile world with barely any atmosphere to a lush, hospitable planet capable of supporting human life.

The first novel deals with the initial colonization effort, which begins with the crew of the Ares, a ship carrying 100 scientists drawn predominantly from the US and the Soviet Union. Upon arriving, the crew builds the first settlement, known as Underhill, as well as colonies on the hollowed out asteroid-moon of Phobos.

After debating what is to be done with Mars, whether to turn it “Green” or leave it “Red”, the United Nations Organization Mars Authority (UNOMA) eventually opts for the “Green” option and terraforming begins. This process involves the drilling of “moholes” in the surface to release subsurface heat to thicken the atmosphere and the detonation of nuclear devices deep in the sub-surface permafrost to release water.

Green Mars, which begins 50 years after events in the first novel, during the dawn of the 22nd century. At this point in time, the Martian landscape is evolving thanks to the expansion of plant life, hence the name. The process is stimulated though the use of continent-sized orbital mirrors which focus sunlight to and away from various sectors of the planet, to melting the northern polar ice cap, and digging moholes deep enough to form volcanoes.

In the third and final installment, Blue Mars, long-term terraforming has created atmospheric pressure and temperature conditions that allow for the presence of liquid water on the planet’s surface, forming rivers and seas. This all takes place over the course of the following century, long after Earth has flooded and revolutions have displaced corporate control of the planet. Because of this, Mars has become the principle planet of the Solar System.

Summary:
Terraforming efforts have come a long way in fiction, and hopefully some day soon they will be realizable. Even though the concept remains highly speculative at this point, all proposed efforts are currently focused on Mars. In all ways that count, Mars has everything we would need to make it suitable for human habitation. This includes water, in the presence of the frozen ice caps and possibly underground rivers, and high concentrations of carbon and oxygen in the form of CO2, nitrogen, and gravity to keep the atmosphere anchored.

And most importantly of all, Mars’ atmosphere closely resembles that of Earth several billions of years ago. In time, due to the development of photosynthetic bacteria, enough oxygen was produced to allow for the development of animals. Though the careful introduction of similar bacteria and plants to Mars surface, humans could speed that process along and eventually create a breathable atmosphere. This, in turn, will allow for the creation of an ozone layer and weather patterns. Combined with the melting of the polar ice and underground aquifers, this will lead to surface water in the form of rivers, streams and oceans.

20 thoughts on “Of Terraforming”