Imagine if you will, a machine that gives disabled police officers a chance to continue working with the force, but from the comfort and safety of an office. Rather than walking the beat and putting themselves in harm’s way, they could telepresence themselves to the streets through a robot body, one which does the job of getting around and locating offenders, while they issue the arrests and infractions. This is the concept that lies behind a new breed of patrol robot that is being developed by Lieutenant Commander Jeremy Robins and Florida International University’s Discovery Lab.

Initially, Robins began this program as a way of bringing some of the thousands of disabled police officers and soldiers in the U.S. back to the workforce. Ultimately, this would call for the creation of a “telebot” that is not only equipped with the latest in wireless technology, but also one that can get around and take some serious punishment. In many ways, this is an elaboration on the concept of Robocop, the hybrid man-machine that stole our hearts back in the 80’s with his signature lines: “You’re move creep!” and “Dead or alive, you are coming with me!” And let’s not forget that sweet gun trick!

But of course, these new robots would be asked to do less adventurous things than the gun-toting cyborg who saved Old Detroit. In addition to working as patrol officers, they would responsible for handling all the regular tasks of police officers. These would include responding to 911 calls, writing traffic tickets, patrolling specific routes, and staying vigilant for law breakers. In addition, they could also be charged with safe guarding government and high-value facilities from terrorists or other criminals, doing both surveillance and acting as an on-site security force.

Early sketches of the robot give some indication of what it would look like. Essentially, it would have to be mobile, which would call for a wheeled chassis. It would have to be ambulatory, which would require arms. And it ought to have some semblance of a person, since it would be expected to carry the officer’s voice and interact with people. In essence, even little children need to be able to approach this robot and ask it if it can help them find their mothers. 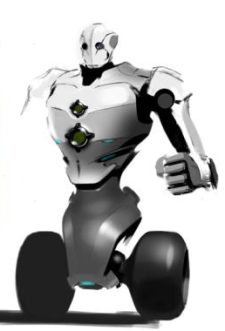 An early rendition, shown here, has been appropriately named “Tough Guy”. Like all other design ideas, the end result calls for a robot that has a two-wheeled chassis, a mobile upper body, and a head that carries a two-way audio and video device so that the officer commanding it can both view and interact with the robots and environment and other people.

Already, the Discovery Lab has announced that the end product will be military grade and usable by the army under the 2 million dollar initiative that DARPA’s (Defense Advanced Research Projects Agency) set up years ago. Robins is also trying to get NASA to sign on with its Robonaut tech – a program to develop a robotic astronaut. So while the end product will be used primarily by police, plans are already in place to expand it to other areas – such as military operations and unmanned space exploration – as well.