Alright! At long last, the Revengers are complete. All thirteen members are registered and accounted for, and so we area ready to start battling crime and corruption in the big city! Yes, I know… twelve isn’t exactly a round number, but unless the makers of Craps have lied to me, its lucky! So without further delay, here is the remainder of the Revengers starting lineup. Behold!

Alter Ego: Nina Dee – Publisher, attempting to claw her way to the top. (plus part-time barista at the local Cuppa’ coffee house)
Abilities: Mad Fighting Skills; Ability to Fly; Regeneration
Appearance: Black wings, bustier, skin-tight pants, elbow-long gloves, long blonde hair, clawed fingers and feet, and a bamboo staff
Backstory: Nina was living abroad in Tokyo when she became involved with a Yakuza arms dealer. Unaware of the deeds committed by this man, she was blinded to the wrong doing taking place around her. Until one day, when she realized a mass killing had been carried out using weapons he was shipping. When she confronted him about it, he shot her and left her in a shallow grave. While lying there, she experienced an overwhelming sense of rage, and the souls of the children reaching out to her. A horrific metamorphosis took place that not only saved her life, but transformed her mind, her body, and her soul for a single purpose – Revenge. Rising from her grave a new and malformed creature, Nina vowed to never allow the innocent to suffer at the hands of the greedy and uncaring again, and to never touch a weapon forged by the hand of man.
Catchphrase: “You’ll pray to this Angel, but the only thing I’ll save you from is your next breath!” 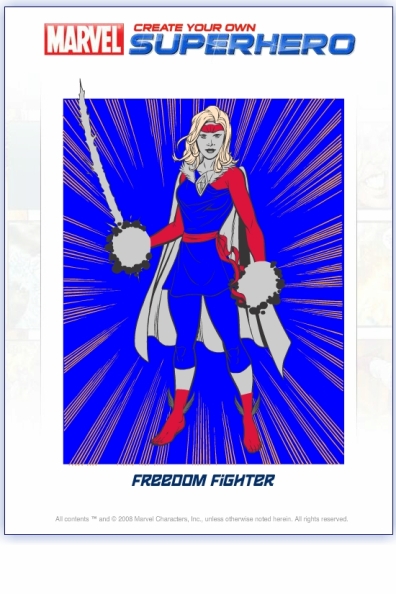 Alter ego: Carolyn Page, lover of man, beast and the epic discovery of joy.
Appearance: Blue, red and gunmetal grey ensemble with a hint of feathers, ribbons, brooch insignia, powder gray ankle flight controls, fiery sword.
Abilities: Ability to Fly, Mad Fighting Skills, Super Strength
Backstory: Page emerged from the wilderness back in June 1765 and has remained a force for joy and justice ever since. Her immortality is as mysterious as she is, as is the origin of her signature move, the high kick. To those seeking to know her past and why she fights injustice and hate with as much verve and dedication as she does, there remains only her bright smile and her enduring motto…
Catchphrase: “Freedom Fighter Flies for Freedom..!”

Alter Ego: Lance Schubert, non-violent activist, writer
Appearance: High-tech suit, form fitting and temperature sensitive. In extreme heat, turns white, in cold, black.
Abilities: Teleportation, Healing, Elasticity
Backstory: Lance woke up one day in the hospital, the sole survivor of a collapsed California high-rise. Everyone he knew or cared for died in the fall, but his new abilities gave him a sense of purpose. And so he headed east and things started happening to his body. In addition to being able to go from one place to the next without moving, he could bend his body in ways that no human body could, and heal instantly when hurt. With his newfound abilities, his non-violent activism found new expression, as a means of stopping evil-doers without inflicting harm.
Catchphrase: “I will ease the pain.”

6 thoughts on “The Revengers Are Complete!”