This past week, history was made when Jeff Bezos (founder of Amazon.com) and his privately funded company, Bezos Expeditions, announced that they had successfully retrieved pieces of the very engines that had once launched Apollo astronauts to the moon. Using remotely operated vehicles and a series of slings, the crew members recovered enough parts to reconstruct the majority of two F-1 rocket boosters.

Bezos Expeditions announced last year that using state-of-the-art deep sea sonar, that they had discovered the remains off the coast of Cape Canaveral off the coast of Florida. And this past Thursday, and with NASA’s help, Bezos located the fragments at a depth of almost 4.8 kilometers (3 miles) and began hauling them to the surface. Bezos claims they belonged to the historic Apollo 11 spaceflight, but further study and restoration will be needed before their identity can be confirmed. 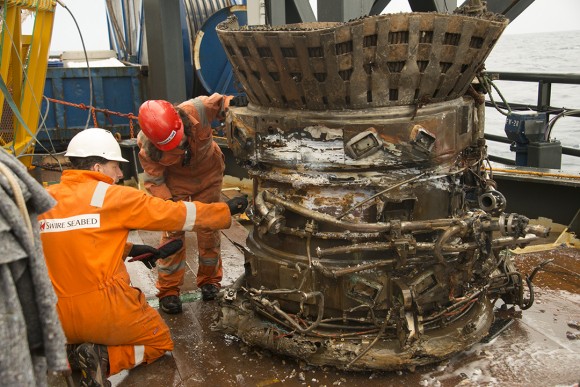 Regardless, this is an exciting find, and the nature of the rocket boosters confirms that they were at least part of the Apollo program. Between 1968 and 1972, ten missions were conducted that flew out of the Kennedy Space Center, each one using the Saturn V rocket, that used five F-1 engines to boost them into orbit. Once the rockets had spent their fuel, they were detached and fell into the sea.

That means that approximately sixty five F-1 engines reside in the ocean off the coast of Florida. No telling which of those these ones could be, but it is hoped that serial numbers will be retrieved from the engines that can connect them to a specific Apollo mission. But regardless, this is an exciting find, and could not have come at a better time since NASA is looking to embark on a renewed era of exploration.

All told, Bezos and his team spent three weeks at sea, working almost 5 kilometers below the surface. During this time, Bezos claims that his team found so much:

We’ve seen an underwater wonderland – an incredible sculpture garden of twisted F-1 engines that tells the story of a fiery and violent end, one that serves testament to the Apollo program. We photographed many beautiful objects in situ and have now recovered many prime pieces. Each piece we bring on deck conjures for me the thousands of engineers who worked together back then to do what for all time had been thought surely impossible.

Naturally, NASA was pretty impressed with the find as well. After the find was announced, NASA Administrator Charlie Bolden made the following statement on behalf of the Agency:

This is a historic find and I congratulate the team for its determination and perseverance in the recovery of these important artifacts of our first efforts to send humans beyond Earth orbit. We look forward to the restoration of these engines by the Bezos team and applaud Jeff’s desire to make these historic artifacts available for public display.

Needless to say, this is an exciting find, regardless of whether or not these rockets were the same ones that sent Neil Armstrong, Buzz Aldrin and Michael Collins to the Moon. Naturally, I hope it is. I can think of no greater tribute to Armstrong’s memory so soon after his passing. I can imagine him looking down on this from the stars, where he now resides, with a big old smile!

And be sure to check out this video taken by the Bezos Expedition of the undersea find:

One thought on “Apollo Rocket Engines Recovered from Seafloor”