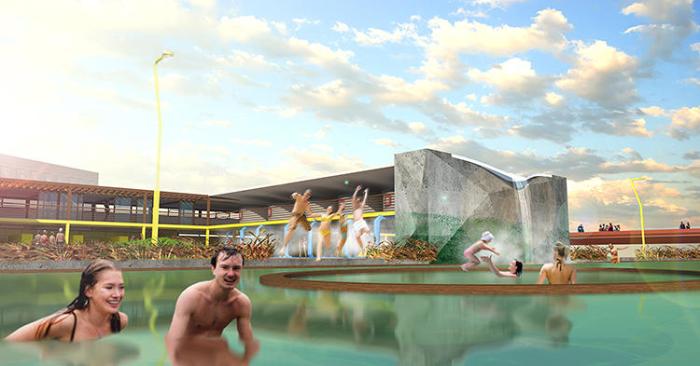 Water pollution is one of the most serious environmental concerns facing the planet, and as with most things environmental, the culprit is urban sprawl. Take Newtown Creek in the Brooklyn neighborhood of East Williamsburg, which is one of the smelliest and dirtiest watersheds in the world. In addition to oil and industrial contaminants, the watershed is heavily burdened by the worst byproduct of urban living there is: sewage.

At present, storm water combines with the local sewage in a pipe-overloading combination that sends over a billion gallons of wastewater into the creek each year. Unlike industrial chemicals, which can be captured and treated to render it harmless, urban sewage is created in volumes that are extremely difficult to manage. And for most cities, the option of simply dumping it in the ocean is too attractive to pass up.

However, architect Rahul Shah has a bold solution for dealing with this problem: Build a swimming pool. The Exorcise Pool – which Shah proposed for his master’s thesis at Parsons The New School For Design – wouldn’t use water directly from the Newtown Creek, its water supply would be the same, and its purpose would be both to mitigate and reveal the woeful state of local water pollution.

Instead, Shah’s project would divert an estimated 76,000 cubic feet per year of run-off into “bioswales”: ravines full of cattails, bulrush, and algae that would both absorb and carry water downhill. These bioswales would replace sidewalks on eight blocks of East Williamsburg, covered by grates where there are garages or doors to warehouse apartments.

Water not absorbed by the plants would be carried to a series of water treatment technologies, using everything from algae to UV light to a bed full of reeds that will help trap solids. Ultimately, the water would not be clean to the point of drinkability, but would be safe as anything found in a pond. And in addition to drawing attention to the state of the river, the purpose, according to Shah, would also be to “showcase of different methods of water treatment.”

But of course, the main attraction, once all this water is treated, would be a series of patio misters and a public pool. The misters, according to Shah, will act as a sort of “test of faith”, where people decide to take a leap by letting treated water touch their skin. After that tentative step, they will have the option of swimming in it.

And though the project is not being realized just yet, it stands as a suggestion of how to repurpose and redesign urban structures that were once sources of pollution into something healthier and more natural. In many ways, it calls to mind the work of the design firm Terreform ONE – which is seeking to convert Brooklyn’s Naval Yard into a vast greenspace through living architecture – or New York’s real estate firm Macro Sea, which began converting old dumpsters into mobile swimming pools back in 2011.

In the end, its all about converting the problem into a solution. Repurposing and redesigning the older, dirtier habitats of the past and turning them into something that actively cleans up the despoiled environment is much cheaper and easier than bulldozing and redeveloping them, after all.

And it also serves to remind us of how large urban environments are a part of the solution as well. With many people crammed close together amidst such sprawling infrastructure, the challenge of meeting future demands for space and clean living is visible and direct. As such, it has a hand in leading to innovative solutions and bright ideas.

2 thoughts on “NYC’s Futuristic Pool: Cleans Water Before You Swim”