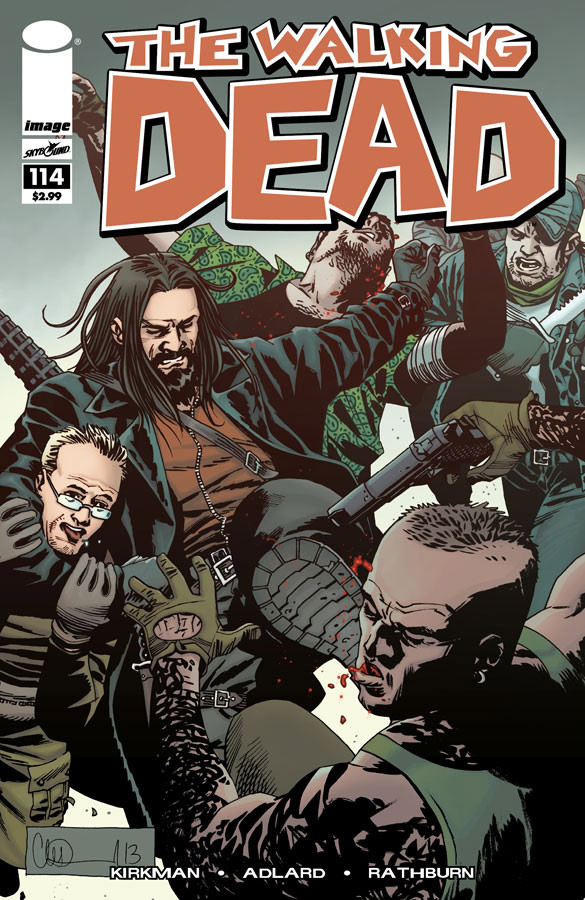 All I can say is… finally! After another month and a half of waiting, and feeling pretty let down by the last issue, the final issue of Volume 19 is out! And it’s a good thing too. It’s pretty rare when the source material begins to seem like the show it was made into, but the last few issues/volumes of The Walking Dead have been dragging out in such a way that I was seriously beginning to think I was watching the show instead.

But that’s to be expected, given that the name of Volume 19 is March to War. Including issues 109 to 114, it covers  – at length – all the preparations Rick and his people are making, alongside the other communities, to prepare for war with their nemesis Negan. And in issue 112, foreseeing an opportunity, Rick jumped the gun and accidentally triggered things a bit prematurely.

Luckily, things worked out and his bacon was saved. This occurred in issue 113 and 114, where Andrea managed to avoid getting herself killed and “Jesus” and his pals showed up in time to scare Negan’s thugs off. However, Negan and what was left of his crew made it away and got back to his own headquarters, announcing to his many thugs that they were going to war.

Volume 20, titled All Out War (and which will include issues 115-126), will begin on October 9th (great, another month of waiting!). And after all the buildup, and the big ol’ inciting event that took place in the last two issues, we’re finally gonna get to see some war and hopefully watch Negan get his ass kicked! Or maybe he’ll win and all the characters we’ve come to know and love – those that remain – will die horribly!

But if I were a betting man, I would say that a combination of both is likely to occur. After all, it’s The Walking Dead, people! Things never end happily. They just go on and on…