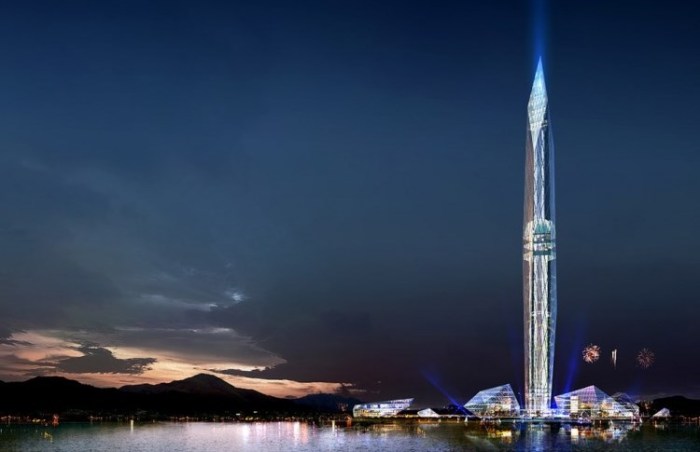 All over the globe, governments and design firms are looking to create living examples of arcologies. Merging next-generation architectural with ecological sustainability, this futuristic concept is now becoming a reality, with projects ranging from Masdar Eco City in Dubai, to Crystal Island in Moscow, and China’s Shanghai Tower.

Not to be outdone, South Korea has proposed an equally audacious building plan that calls for the construction of a 450 meters tower that uses the latest in optical technology to render itself virtually invisible. Known as Tower Infinity, or City Tower, the building will be located in Cheongna (near the Incheon Airport just outside of Seoul) and will use the same technology that military contractors do to create “adaptive camouflage”.

This involves fitting the building with a high-tech LED facade that integrates projectors and 18 strategically placed optical cameras. These cams will snap real-time pictures of the area directly behind the building, digitally stitch them into a panorama, and project them back onto the building’s reflective surface. This will create the illusion that viewers are looking straight through the building, making it appear to blend into the skyline at certain times of day.

According to GDS – the design firm behind Tower Infinity’s creation – the purpose of the building is largely symbolic. According to their website:

The tower subtly demonstrates Korea’s rising position in the world by establishing its powerful presence through diminishing its presence. Korea will have the unique position of having the ‘best’ tower by having an ‘anti-tower.

And while no word has been given yet on the relationship between the structure’s invisibility and planes from the nearby airport, it seems logical to stress that the building’s “invisibility cloak” is not perfect, nor is it meant to be. While it is able to generate an image that allows it to blend into the natural environment more readily, the building still leaves a translucent outline when at full power.

GDS also indicated that the purposes of the building go beyond the symbolic. In addition to showcases Korea’s presence in the global economy, the technology can be used for advertising and entertainment. As the company said in a statement:

This same technology also allows the tower to become a 450-meter-tall billboard screen and urban focal point for all arriving at Incheon,

The tower will house a 4D theater, a water park, landscaped gardens, and the third-highest observation deck in the world. Basically, it is intended as a tourist mecha in addition to everything else, which makes sense given its strategic location close to a major airport.

6 thoughts on “The Future is Here: World’s First “Invisible” Building”