Welcome back for more of AMC’s The Walking Dead. Last time around, due to a combination of inexcusable procrastination and excusable travel plans, I had to review all three episodes of the season in one go. Henceforth, I hope to be more studios and cover episodes as they come. And with that mind, I was sure to watch this week’s episode just as soon as I could.

Picking up where things left off, this episode opens with Rick still looking into what Carol did to Karen and David – aka. the people she killed and immolated to protect the others. After talking to Lizzy, Rick takes Carol on a supply run, in part because they lost supplies after the initial outbreak of the flu, but also because Daryl and the others have yet to return.

A third reason Rick has chosen to bring Carol along is to keep an eye on her, as he clearly doesn’t trust her anymore. They come to a small town and begin combing houses, and find two young people – Sam and Anna – held up in one. They learn they are survivors from a refugee center who have been on the move ever since. The couple ask to come with them and help them search the neighborhood, and Rick reluctantly agrees.

While searching the nearby houses, Rick and Carol get a chance to talk about what she did, and she remains unrepentant. When they return outside, they see Anna’s remains being devoured by several Walkers. Carol dismisses it and suggests they go back to wait for Sam, but when he doesn’t show, she recommends they leave.

After loading up their car with everything they’ve found, Rick tells Carol that she needs to move on. In addition to Tyreese wanting blood, he knows the others in the prison won’t accept her once they know the truth, and that she’s now strong enough to survive on her own. After securing a car for her, Carol gives Rick the watch Ed gave to her on her their anniversary and drives off. 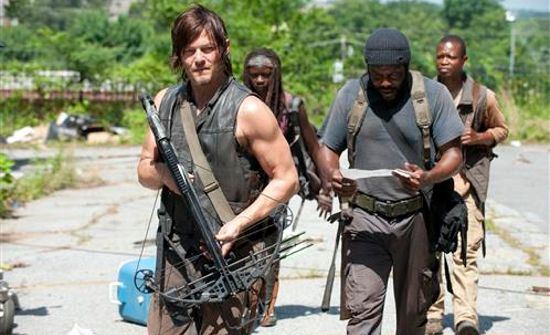 Meanwhile, Daryl and company have managed to find their way to autoshop that’s been overgrown by vines. After clearing it, during which time Tyreese nearly dies again, Daryl and Bob begin searching the store for supplies while Michonne and Tyreese clear a minivan they discover within the vines. She chides him for his anger, telling him that while understandable, it will get him killed.

With minivan working, they drive the rest of the way to the veterinary college and find all the medicine and supplies they need. On the way out, they are spotted by a group of Walkers that also died from the flu strain and begin running. After taking cover in a storage room, they find that the door to the exit stairwell is chained and there are many more Walkers on the other side.

Reasoning that the Walkers in the stairwell might not have died from the flu, they break open the doors and start fighting their way out. However, all exits up above are cut off as well, and they are forced to break a window and climb out. Bob nearly loses his bag to a herd of Walkers but manages to pull it up, and Daryl sees that it had a bottle of liquor inside. Daryl tells Bob that he if takes one sip before they get back, he’ll kill him himself.

They load up their minivan and leave, and Michonne tells Daryl that she’s decided to let the Governor go and move on. They and Rick both head back for the prison.

Summary:
Clearly, this episode was all about moving on. In addition to Michonne telling Tyreese that he needed to let go of his anger, and her taking her own advice and letting the Governor go, Rick sends Carol on her way as a means of resolving their moral dilemma. But of course, there was also the aspect of the episode from which it derives its name. 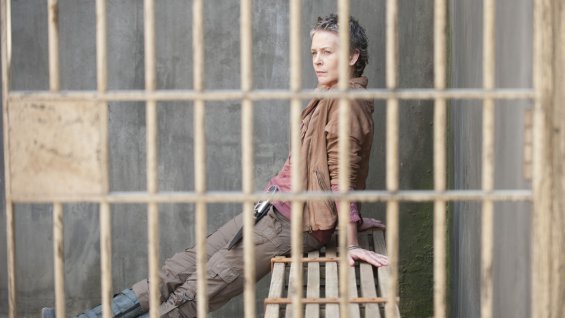 Rick’s moral dilemma arises from the fact that Carol appears to have become indifferent to death and the suffering of others. And then there was the issue of Bob’s alcoholism, how he was willing to risk everything for a bottle of booze while the others were fighting to make sure they got out with the medicine they needed to save their people’s lives.

Taken together, these threads once again stress the larger theme of the story. On the one hand, people are forced to do what they have to to survive. But in the end, there is only so much which can be sacrificed before staying alive becomes meaningless. This episode managed to capture that quite well.

However, there were also a lot of things which were kind of annoying. For one, the way they’ve now written Carol out seems kind of weak, especially when one considers how she really died. In the comic, Carol tried to commit suicide after losing Tyreese, her lover, to Michonne. After that, she became somewhat erratic and dependent, and felt increasingly isolated as a result. She then let a Walker bite her and died tragically.

And let’s not forget that they’ve done this once before, let us think Carol was gone when in fact she wasn’t. But if this is indeed the end of her thread, I would have to say that it’s not too surprising. Given what they’ve done with her in the last two seasons, minimizing her role and then turning her into a sociopath, I’d say the decision to drop her makes sense.

However, there is another point of interest that fans of the original could not fail to notice. In this episode, Tyreese and Michonne began chatting and seemed to find they had something in common. Given their relationship in the original comic, one can’t help but wonder if this will evolve into something more. But of course, this could be simple projection, since she also appeared to be flirting with Daryl at one point. Not sure where their going with that…

But above all, I mainly got a bad feeling from this episode due to the fact that it kind of felt like filler and portends of how this season is likely to drag on like the others. I foresee next episode being a race to try and save all the infected, with lots of talking and introspection! And when all that’s done, I’m thinking the Woodbury people – save one or two new additions to the cast – will be dead and the core will finally decide to leave the prison behind.

Maybe then, they’ll finally get back on script! Sigh… Oh well, at least Issue 116 will be out in a few days!