Two days ago, another major milestone passed for one of NASA’s famed rovers. But this time around, it wasn’t the spotlight-hogging Curiosity or the die-hard Opportunity rover that was the subject of interest. It was the Spirit rover, the other half of NASA’s now legendary Mars Exploration Rovers (MER) that landed on the Red Planet over a decade ago.

Yes, January 3rd of this year marks the 10th anniversary since the safe landing of NASA’s renowned Spirit rover on the plains of Mars, making her the oldest rover in operation on the planet’s service. Opportunity, her twin sister, landed on the opposite side of the Mars three weeks later – on Jan. 24, 2004. The goal was to “follow the water” as a potential enabler for past Martian microbes if they ever existed.

Together, the long-lived, golf cart sized robots proved that early Mars was warm and wet, billions of years ago – a key finding in the search for habitats conducive to life beyond Earth. It was these findings that have since been followed up on by Curiosity rover in its ongoing search for water and organic particles in the soil, and MAVEN’s planned surveys of the Martian atmosphere.

And it was a decade ago that the famous robot survived the 6 minute plunge through the thin Martian atmosphere, which involved scorching atmospheric heating, and then bounced some two dozen times inside cushioning airbags before coming to a stop. It then gradually rolled to a stop inside 161 km (100 mile) wide Gusev Crater. This landing was known as the “6 minutes of Terror”. 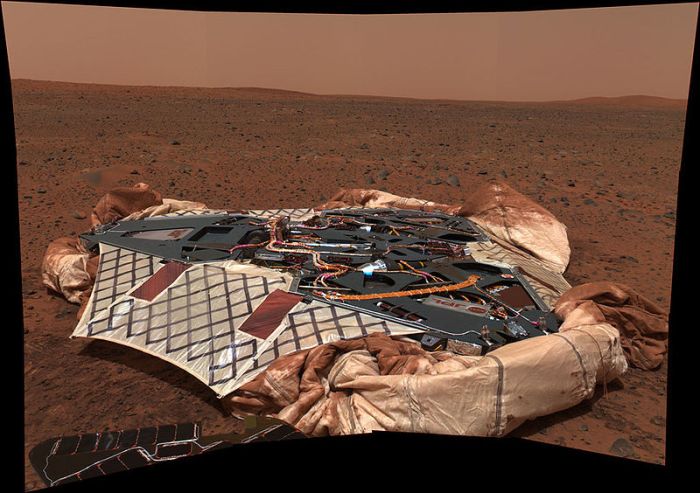 The three petaled landing pad then opened and Spirit was deployed in what was a milestone event. This deployment will be forever remembered in the annuls of history, mainly because of the groundbreaking scientific discoveries that ensued, not to mention the unbelievable longevity of the twins. And while Spirit did not make it past 2010 – effectively remaining in service for six years – she accomplished quite a bit in that time.

Before they were launched atop a series of Delta II rockets in the summer of 2003 from Cape Canaveral, the dynamic, solar powered robo duo were expected to last for only 90 Martian days (Sols). NASA engineers firmly believed that dust accumulation on the life-giving solar panels, an engineering issue or the extremely harsh Martian environment would terminate them before long. 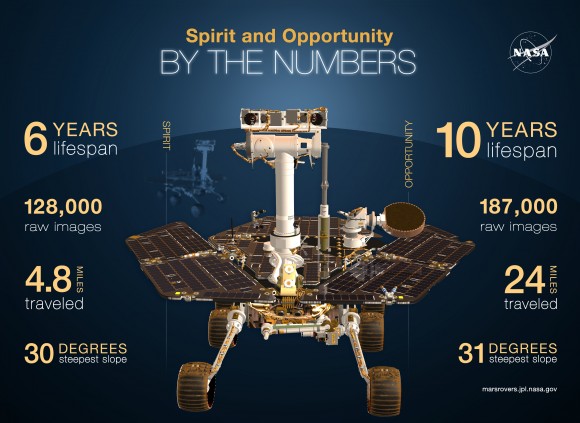 But in reality, both robots enormously exceeded expectations and accumulated a vast bonus time of exploration and discovery in numerous extended mission phases. In part, the harsh Martian winds occasionally cleaned their solar panels to give them both a new lease on life. And more importantly, the rovers’ components just kept working miraculously.

And she kept working faithfully for six years until communications officially ceased in 2010. Altogether, Spirit drove 7.73 kilometers (4.8 miles) across the Martian surface – about 12 times more than the original goal set for the mission – and transmitted over 128,000 images. And shortly after landing, Spirit scaled Husband Hill and found evidence for the flow of liquid water at the Hillary outcrop. 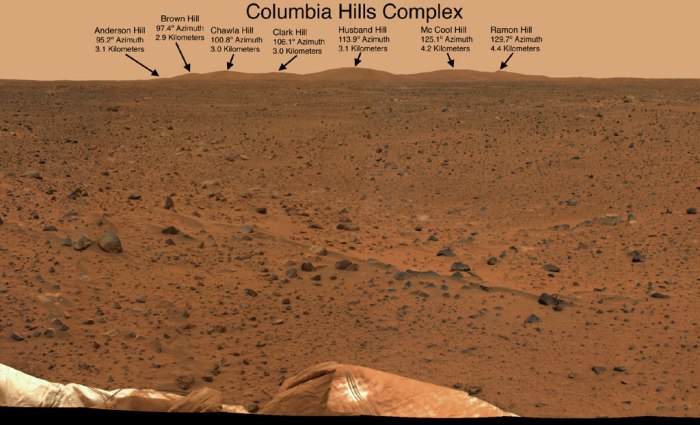 This was especially impressive, seeing as how the rovers were not designed to climb hills. But eventually, she managed to scale the 30 degree inclines and collect a series of rock samples using her Rock Abrasion Tool (RAT). The samples were then inspected using her on-board spectrometers and a microscopic imager. Eventually she drove back down the hill and made even greater scientific discoveries.

These occurred in 2007 in an area known as “Home Plate”, where she unexpectedly got mired thanks to an ancient volcanic feature named ‘Home Plate’ that prevented the solar arrays from generating. In the process, her right front wheel churned up a trench of bright Martian soil that exposed a patch of nearly pure silica, which was formed in a watery hot spring or volcanic environment. 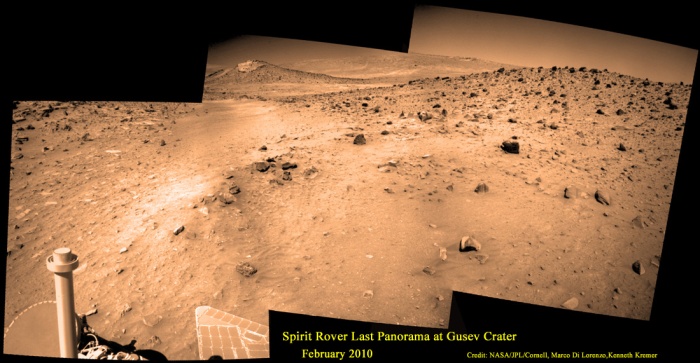 Three years later, in February of 2010, Spirit once again got mired and took her last panorama (pictured above), which was stitched together from raw images by Marco Di Lorenzo and Ken Kremer. After several attempts to save her, NASA eventually declared Spirit dead in the water, her last resting place being the same as where she made her landing – the Gustev Crater in the Aeolis quadrangle.

At one time, many billions of years ago, the Ma’adim Vallis channel – a natural river-like depression running from the crater – probably carried liquid water and/or ice into Gutev. NASA scientists believe this has left sediments in the crater that could be up to 915 meters (3000 feet) thick. Spirit all but confirmed this when her tire turned up a patch of silica in 07, thus providing the first conclusive evidence of this theory.

The rovers’ principal investigator, Steve Squyres of Cornell University, Ithaca, N.Y., described some of the key findings in a NASA statement, starting with what Spirit found after driving from the crater floor where it landed into the Columbia hills to the east:

In the Columbia Hills, we discovered compelling evidence of an ancient Mars that was a hot, wet, violent place, with volcanic explosions, hydrothermal activity, steam vents — nothing like Mars today.

At Opportunity’s landing site, we found evidence of an early Mars that had acidic groundwater that sometimes reached the surface and evaporated away, leaving salts behind. It was an environment with liquid water, but very different from the environment that Spirit told us about.

When Opportunity got to the rim of Endeavour Crater, we began a whole new mission. We found gypsum veins and a rich concentration of clay minerals. The clay minerals tell us about water chemistry that was neutral, instead of acidic — more favorable for microbial life, if any ever began on Mars.

Because of the rovers’ longevity, we essentially got four different landing sites for the price of two. 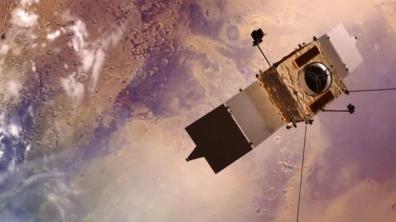 Meanwhile, NASA’s new Curiosity rover just celebrated 500 Sols on Mars and is speeding towards Mount Sharp from inside Gale Crater – which is about the same size as Gusev crater. And a pair of newly launched orbiters are streaking towards the Red Planet as we speak – NASA’s Mars Atmosphere and Volatile EvolutioN (MAVEN) and India’s Mars Orbiter Mission (MOM).

In short, we are not finished with Mars yet. And the past, ongoing and future efforts of our many rovers, orbiters and (someday) astronauts are likely to keep providing us with a slew of new discoveries and revelations about our celestial neighbor.

One thought on “News from Mars: Spirit Rover’s Tenth Anniversary”