For years, biomedical researchers have been developing robotic prosthetics of greater and greater sophistication. From analog devices that can be quickly and cheaply manufactured by a 3-D printer, to mind-controlled prosthetics that move, to ones that both move and relay sensory information, the technology is growing by leaps and bounds. And just last week, the FDA officially announced it had approved the first prosthetic arm that’s capable of performing multiple simultaneous powered movements.

The new Deka arm – codenamed Luke, after Luke Skywalker’s artificial hand – was developed by Dean Kamen, inventor of the Segway. The project began in 2006 when DARPA funded multiple research initiatives in an attempt to create a better class of prosthetic device for veterans returning home from the Iraq War. Now, the FDA’s approval is a huge step for the Deka, as it means the devices are now clear for sale — provided the company can find a commercial partner willing to bring them to market.

Compared to other prosthetics, the Deka Arm System is a battery-powered device that combines multiple approaches. Some of the Deka’s functions are controlled by myoelectricity, which means the device senses movement in various muscle groups via attached electrodes, then converts those muscle movements into motor control. This allows the user a more natural and intuitive method of controlling the arm rather than relying on a cross-body pulley system.

The more advanced myoelectric systems can even transmit sensation back to the user, using the same system of electrodes to simulate pressure sensation for the user. This type of control flexibility is essential to creating a device that can address the wide range of needs from various amputees, and the Deka’s degree of fine-grained control is remarkable. Not only are user’s able to perform a wide range of movements and articulations with the hand, they are able to sense what they are doing thanks to the small pads on the fingertips and palm.

Naturally, the issue of price remains, which is consequently the greatest challenge facing the wide-scale adoption of these types of devices. A simple prosthestic arm is likely to cost $3000, while a sophisticated prosthesis can run as much as $50,000. In many cases, limbs have a relatively short lifespan, with wear and tear requiring a replacement device 3 to 4 years. Hence why 3-D printed variations, which do not boast much sophistication, are considered a popular option. 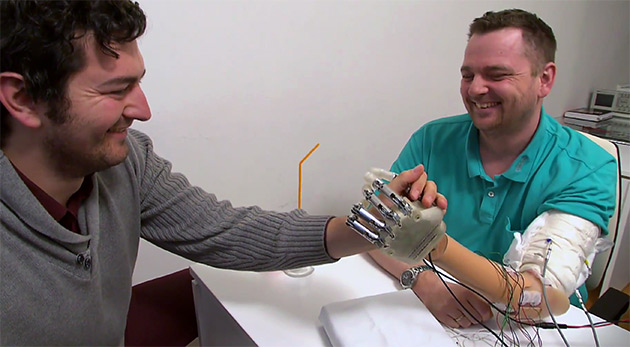 Visual presentation is also a major issue, as amputees often own multiple prostheses (including cosmetic ones) simply to avoid the embarrassment of wearing an obviously artificial limb. That’s one reason why the Deka Arm System’s design has evolved towards a much more normal-looking hand. Many amputees don’t want to wear a crude-looking mechanical device.

At present, the prosthetic market is still too broad, and the needs of amputees too specific to declare any single device as a one-size-fits-all success. But the Deka looks as though it could move the science of amputation forward and offer a significant number of veterans and amputees a device that more closely mimics natural human function than anything we’ve seen before. What’s more, combined with mind-controlled legs, bionic eyes and replacement organs, it is a major step forward in the ongoing goal of making disability a thing of the past.

And in the meantime, check out this DARPA video of the Deka Arm being tested:

4 thoughts on “The Future is Here: Deka Mind-Controlled Arm Gets FDA Approval!”