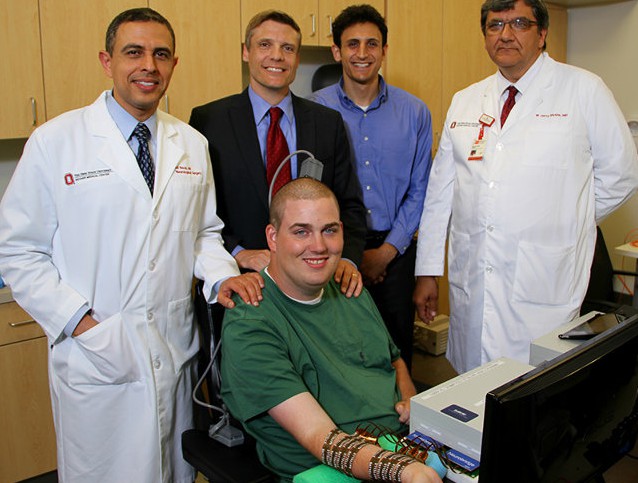 Ian Burkhart, a 23-year-old quadriplegic from Dublin, Ohio, was injured in 2010 in a diving accident, breaking his neck on a sandbar and paralyzing his body from the neck down. He was left with some use of his arms, but lost the use of his legs, hands, and fingers. Thanks to a new device known as the Neurobridge though – a device that allows the brains signals to bypass the severed spinal cord – Burkhart has now moved his right hand and fingers for the first time since the accident.

This device, which was developed in concert by the Ohio State University Wexner Medical Center and the non-profit company Battelle, consists of a pea-sized chip that contains an an array of 96 electrodes, allows researchers to look at detailed signals and neural activity emanating from the patient’s brain. This chip was implanted in Ian’s brain two months ago, when neurosurgeon Dr Ali Rezai of Ohio State University performed the surgery that would implant the sensor chip into the motor cortex of his brain. 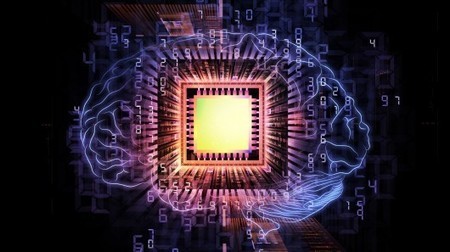 Battelle has been working on neurosensing technology for almost a decade. As Chad Bouton, the leader of the Neurobridge project at Battelle, explains:

We were having such success in decoding brain activity, we thought, ‘Let’s see if we could remap the signals, go around something like a spinal cord injury and then translate the signals into something that the muscles could understand and help someone paralyzed regain control of their limb’.

During the test, which occurred in June, the implanted chip read and interpreted the electrical activity in Burkhart’s brain and sent it to a computer. The computer then recoded the signal, and sent it to a high-definition electrode stimulation sleeve Burkhart wore on his right arm, a process that took less than a tenth of a second and allowed Burkhart to move his paralysed fingers. Basically, Burkhart is able to move his hand by simply thinking about moving his hand, and the machine does the rest. 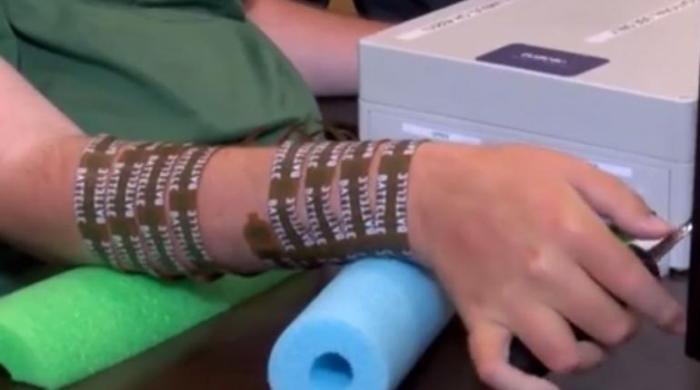 A team led by Chad Bouton at Battelle spent nearly a decade developing the algorithms, software and sleeve. Then, just two years ago, Dr Ali Rezai and Dr Jerry Mysiw were brought on board to design the clinical trials. Burkhart became involved with the study after his doctor mentioned it to him and he learned he was an ideal candidate. He had the exact level of injury the researchers were looking for, is young and otherwise healthy, and lives close to the Ohio State University Wexner Medical Center, where the research is being conducted.

Even so, Burkhart had to think hard before agreeing to the surgery. He also knew that the surgery wouldn’t magically give him movement again. He would have to undergo rigorous training to regain even basic hand function. Mainly, his experience would help move along future technological advances. However, he was excited to be taking part in cutting-edge research which would ultimately help people like him who have suffered from spinal injuries and paralysis.

Post-surgery, Burkhart still had a lot of thinking to do, this time, in order to move his hand. As he explained:

It’s definitely great for me to be as young as I am when I was injured because the advancements in science and technology are growing rapidly and they’re only going to continue to increase… Mainly, it was just the fact that I would have to have brain surgery for something that wasn’t needed… Anyone able bodied doesn’t think about moving their hand, it just happens. I had to do lots of training and coaching.

The hand can make innumerable complex movements with the wrist, the fingers, and the fist. In order for Battelle’s software to read Ian’s mind, it has to look for subtle changes in the signals coming from Ian’s brain. As Bouton explains it, the process is like walking into a crowded room with hundreds of people trying to talk to each other, and you’re trying to isolate one particular conversation in a language that you don’t understand. 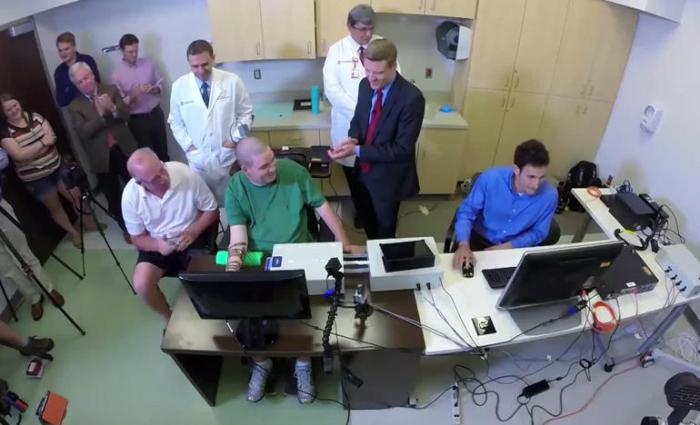 At this point, Burkhart can perform a handful of movement patterns, including moving his hand up and down, opening and closing it, rotating it, and drumming on a table with his fingers. All of this can only be done while he’s in the hospital, hooked up to the researchers’ equipment. But the ultimate goal is to create a device and a software package that he can take with him, giving him the ability to bypass his injury and have full ambulatory ability during everyday activities.

This isn’t the only research looking into bringing movement back to the paralyzed. In the past, paralyzed patients have been given brain-computer interfaces, but they have only been able to control artificial limbs – i.e. Zak Water’s mind-controlled leg or the BrainGate’s device that allow stroke victims to eat and drink using a mind-controlled robotic arm. Participants in an epidural stimulator implant study have also been able to regain some movement in their limbs, but this technology works best on patients with incomplete spinal cord injuries. 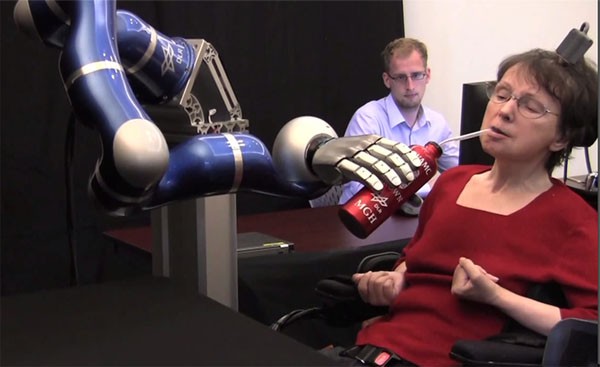 Burkhart is confident that he can regain even more movement back from his hand, and the researchers are approved to try the technology out on four more patients. Ultimately, the system will only be workable commercially with a wireless neural implant, or an EEG headset – like the Emotiv, Insight or Neurosky headsets. The technology is also being considered for stroke rehabilitation as well, another area where EEG and mind-control technology are being considered as a mean to recovery.

From restoring ambulatory ability through mind-controlled limbs and neurosensing devices to rehabilitating stroke victims with mind-reading software, the future is fast shaping up to be a place where no injuries are permanent and physical disabilities and neurological impairments are a thing of the past. I think I can safely speak for everyone when I say that watching these technologies emerge makes it an exciting time to be alive!

And be sure to check out this video from the OSUW Medical Center that shows Ian Burkhart and the Batelle team testing the Neurobridge:

3 thoughts on “The Future is Here: Overcoming Paralysis”