As armies continue to modernize, the challenge of creating new fighting vehicles that withstand the latest in battlefield conditions, and at the same time be more cost-effective, is a constant. And, as the latest announcements made by DARPA and General Dynamics over the course of the summer can attest, its been known to produce some pretty interesting and innovate design concepts.

Known as the Ground X-Vehicle Technology (or GXV-T for short) the aim of this DARPA-funded program is to develop a lighter, more agile successors to the tank. Whereas tanks in the past have always responded to the development of more and better anti-tank weapons with heavier more elaborate armor, the focus of the GXV-T will be on protection that does not result in yet another bigger, badder, and way more expensive tank.

Beginning in 1917, the development of the tank led to a revolution is modern warfare, which has led to an ongoing arms race ever since. In just the last half-century, the guns used to take out tanks have been joined by rockets, guided missiles, and high-tech rounds designed to penetrate the thickest steel. Tank designers have responded with composite armor, reactive armor, and even electric countermeasures to detonate warheads before they make contact.

The result of this is a spiral of larger weapons, leading to larger tanks, leading to larger weapons until the mainline tanks of today have become behemoths so large that they are difficult to deploy, very expensive and can only be used in certain environments. To prevent this, DARPA wants to not just produce a more advanced tank, but one that moves away from relying so heavily on armor for survival. 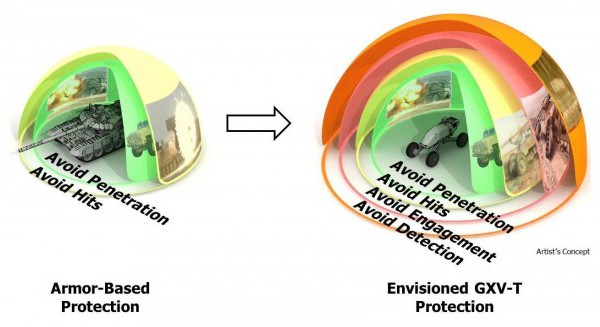 The GXV-T is intended to pursue technologies that move away from armor with the goal of making tanks 50 percent smaller, with crews half their present size, able to move at double the present speed, make them capable of operating over 95 percent of the terrain, and make them harder to detect and engage. As Kevin Massey, DARPA program manager, explained:

GXV-T’s goal is not just to improve or replace one particular vehicle – it’s about breaking the ‘more armor’ paradigm and revolutionizing protection for all armored fighting vehicles. Inspired by how X-plane programs have improved aircraft capabilities over the past 60 years, we plan to pursue groundbreaking fundamental research and development to help make future armored fighting vehicles significantly more mobile, effective, safe and affordable.

What this amounts to is finding ways to build tanks that can move around the battlefield like off-road vehicles, can dodge incoming fire rather than taking it, reposition its armor to its most effective angle, provide the crews with full situational awareness similar to that afforded fighter pilots, and make them stealthy against both infrared and electromagnetic detection.

To achieve this, DARPA is soliciting new concepts and new technologies for designers. As you can see from the concept art above, some ideas have already been floated, but they remain very much in the design stage for now. The agency says that it hopes to see new GVX-T technologies emerge two years after the first contracts – which are slated to be awarded in April next year – with the hopes that the new technologies can be fast-tracked into demonstrators.

Meanwhile, General Dynamics is busy producing what will amount to the next-generation of armored vehicles. As part of a contract with the British Ministry of Defence (MoD), the company has been contracted to deliver 589 light-armor Scout Specialist Vehicles (SV) to the Army between 2017 and 2024. The tracked, medium-weight armored vehicle is designed to provide state-of-the-art, best-in-class protection for its crews. 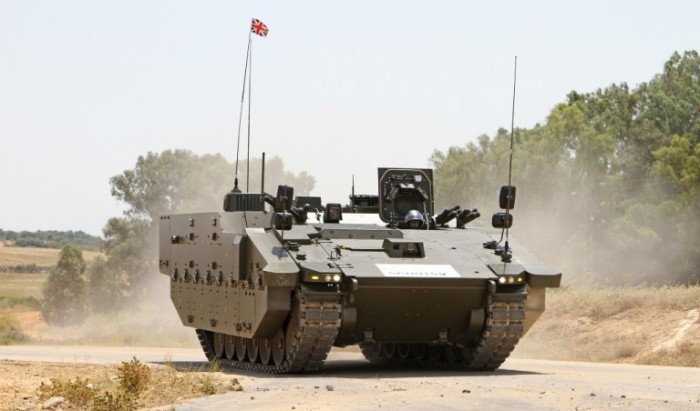 The Scout SV is intended to fill an important role in the British Army’s Intelligence, Surveillance, Target Acquisition and Reconnaissance (ISTAR) capability. The Scout comes in six variants based on a common platform with shared mobility, electronics, and survivability systems, has an open electronic architecture, a modular armor system, and places emphasis on the ability to upgrade in order to incorporate new technology and meet new threats.

The Scout variants include Reconnaissance, Protected Mobility Reconnaissance Support (PMRS), Command and Control, Engineering Reconnaissance, Repair, and Recovery. According to General Dynamics, these are designed to provide the basics of protection, survivability, reliability, mobility and all-weather ISTAR capabilities for a wide range of extended military operations at a reduced cost.

The Scout’s main armament in its turret-mounted 40-mm cannon, but it also comes equipped with acoustic detectors, a laser warning system, a local situational awareness system, an electronic countermeasure system, a route-marking system, and a high-performance power pack. The announced contract also includes the provision of support and training by General Dynamics for the delivered vehicles.

The deal represents the single biggest contract for armored vehicles that the British Army has signed since the 1980s. It also comes on the eve of a NATO Summit, and at a time when Britain is contemplating the future of its forces as it prepares for future operations similar to what it experienced in Afghanistan and Iraq. In these cases, the warfare was unconventional and prolonged, requiring a whole set of strategies. 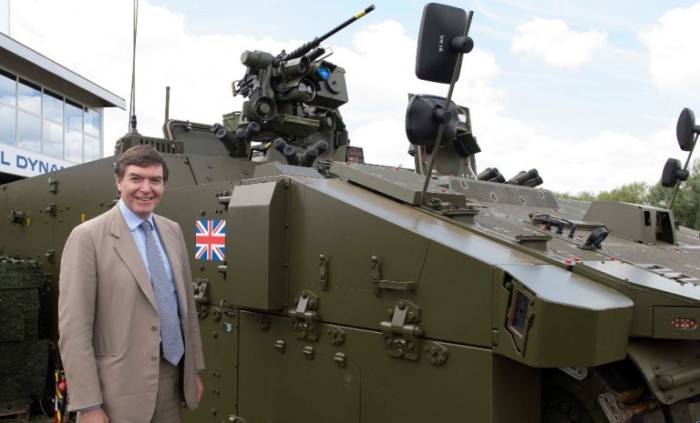 As British Prime Minister David Cameron declared when speaking of the deal:

With the second largest defence budget in NATO, meeting NATO’s two per cent of GDP spending target and investing in new capabilities to deal with the emerging threats we are ensuring Britain’s national security, staying at the forefront of the global race and providing leadership within NATO.

As the saying goes: “necessity is the mother of invention”. Well, there is nothing more necessary in war than making machines that are practical, effective, and not cost the taxpayers an arm and a leg. Between dwindling budgets, improved technology, and the fact that future operations are likely to take place in war-torn and impoverished areas, the race to build a weapon-system that can handle it all is sure to be both interesting and productive!

2 thoughts on “The Future of Tanks: Ground X and Scout Specialist Vehicles”