Though it is already home to the world’s largest building – in the form of the New Century Global Center in Chendu – China is seeking to create the world’s tallest structure as well. Designed by UK-based Chetwoods Architects and known as the Phoenix Towers, this tower concept is slated to be built in Wuhan, Central China. But equally impressive is the fact that this building will be suck pollution out of the air and water and will host more than the usual building features.

The larger of the two towers reaches a total of 1000 meters (3,280 ft) in height – beating the Burj Khalifa by 170 meters (558 ft) – and sports an ambitious list of sustainable technology. The towers cover 7 hectares (17 acres) of ground on a 47-hectare (116-acre) plot that sits upon an island in a lake. In an attempt to make the design of the towers more relevant to Chinese culture, Chetwoods drew upon the Fenghuang (or Chinese Phoenix) mythological bird and designated the larger tower Feng (male), and the smaller tower Huang (female).

The designers hope the building will serve as a catalyst for more sustainable design in the industrial city. Laurie Chetwood, chairman of U.K.-based Chetwoods, the architects on the project explained how the building’s water-cleaning features work:

The water goes up through a series of filters. We don’t use power to pull the water up, we’re using passive energy. As it goes through the filters and back, we’re also putting air back into the lake to make it healthier… Wuhan is an unusual city, dotted with huge lakes. Protecting the lakes could lead to other projects that protect them even more.

The towers also have pollution-absorbing coatings to help clean the air, vertical gardens that filter more pollution, and a chimney in the middle of the larger tower naturally pulls air across the lake for better ventilation. For the sake of generating energy, the building relies on a combination of wind turbines, lightweight solar cladding, and hydrogen fuel cells running on the buildings’ waste, giving it energy independence and even having enough left over for the local community. 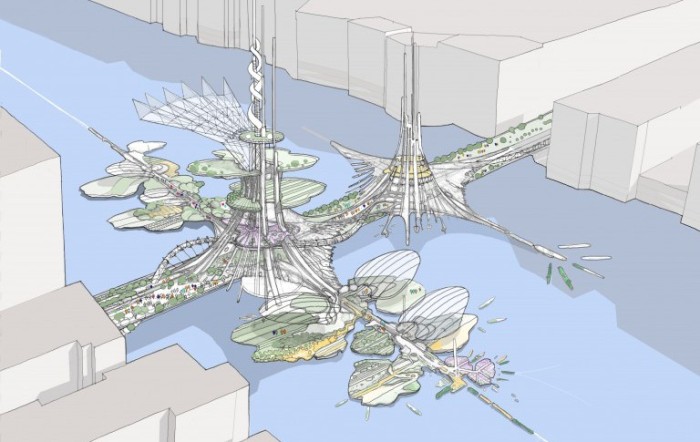 Inspired by the Chinese symbols of the phoenix, and the concept of yin and yang, one tower feeds the other with renewable power in a symbiotic relationship. Spheres hanging between the two towers will also hold restaurants with views of the lake. Pending approval by the city’s mayor, construction may begin by the end of the year and could be completed by 2017 or 2018, a pace that the architects say would be unlikely in other countries.

According to Chetwood, construction in China obeys a different set of rules and parameters than his native Britain:

The most amazing thing for me is that in the U.K. we strive as designers to get things built, and there’s a lot of red tape, but the Chinese seem to have a different view of things. I think they’re incredibly optimistic. If you have an idea and you think, ‘Oh, is this going to be too exciting’, they’ll actually want it more exciting. It’s more ambitious. They’re quite keen to push the boundaries. For a designer, that’s fantastic. It’s a thrill.

Whereas the sheer size of the buildings is reflective of China’s aim to assert its national authority on the world stage, it’s focus on pollution-eating and green energy is reflective of the desire to create living spaces in a sustainable way. And it is one of many building concepts being considered by Chinese authorities that seeks to address pollution by achieve energy independence, while at the same time being part of the solution by incorporating pollution-eating features.

For instance, there’s China’s Shanghai Tower, which finished construction in August of last year. This building is currently the tallest tower in China, is one-third green space and a transparent second skin that surrounds the city in a protective air envelope that controls its internal temperature. In addition, vertical-axis wind turbines located near the top of the tower and geothermal vents located at the bottom will generate 350,000 kWh of supplementary electricity per year.

And then there’s Sky City, a building under construction (though currently on hold) in Changsha, Hunan province. Designed by Broad Sustainable Building, this 666m meter (2,185 ft) skyscraper incorporates numerous sustainable building features. These include modular design, recycled building materials, non-toxic building materials, insulated walls and quadruple glazing. Beyond China, there is also the Pertamina Energy Tower in Jakarta, which relies on geothermal, solar, and wind turbines to act as the very picture of energy independence.

Together, these concepts (and many others currently under consideration) represent the future of urban planning and architecture. In addition to being assembled with recycled material, fabricated using less wasteful methods (like 3-D printing), and seeing to their own energy needs in a clean and sustainable way, they will also incorporate carbon capture, air and water cleaning technology that will make urban environments healthier places to live.