One of the most interesting and speculative things to come out of the William Gibson’s cyberpunk series The Sprawl Trilogy was the concept of Simstim. A term which referred to “simulated stimulation”, this technology  involved stimulating the nervous system of one person so that they could experience another’s consciousness. As is so often the case, science fiction proves to be the basis for science fact.

This latest case of science imitating sci-fi comes from Barcelona, where a group of interdisciplinary students have created a revolutionary VR technology that uses virtual reality and neuroscience to let people see, hear, and even feel what it’s like in another person’s body. The focus, though, is on letting men and women undergo a sort of high-tech “gender swapping”, letting people experience what it’s like to be in the others’ shoes. 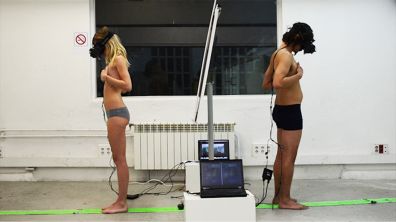 Be Another Lab is made up of Philippe Bertrand, Daniel Gonzalez Franco, Christian Cherene, and Arthur Pointea, a collection of interdisciplinary artists whose fields range from programming and electronic engineering to interactive system design and neuro-rehabilitation. Together, the goal of Be Another Lab is to explore the concepts of empathy through technology, science, and art.

In most neuroscience experiments that examine issues of empathy and bias, participants “trade places” with others using digital avatars. If a study wants to explore empathy for the handicapped, for example, scientists might sit subjects down in front of a computer and make them play a video game in which they are confined to a wheelchair, then ask them a series of questions about how the experience made them feel.

However, Be Another Lab takes a different, more visceral approach to exploring empathy. Instead of using digital avatars, the group uses performers to copy the movements of a subject. For example, racial bias is studied by having a subject’s actions mirrored by a performer of color. And for something like gender bias, men and women would take a run at living inside the body of one another.

Bertrand and company have taken this approach to the next level by leveraging the tech of a paid Oculus Rift virtual reality headset, renaming it the Machine To Be Another. In the project, two participants stand in front of one another, put on their headsets, and effectively see out of one anothers’ eyes. When they look at each other, they see themselves. When they speak, they hear the other person’s voice in their ears.

But things don’t end there! Working together, the two participants are encouraged to sync their movements, touching objects in the room, looking at things, and exploring their ‘own’ bodies simultaneously. Bertrand explains the experience as follows:

The brain integrates different senses to create your experience of the world. In turn, the information from each of these senses influences how the other senses are processed. We use these techniques from neuroscience to actually affect the psychophysical sensation of being in your body.

In other words, in combination with being fed video and sound from their partner’s headset, by moving and touching things at the same time, the Machine To Be Another can actually convince people that they are in someone else’s body as long as the two partners remain in sync.

It’s a radical idea that Be Another Lab is only beginning to explore. Right now, their experiments have mostly focused on gender swapping, but the team hopes to expand on this and tackle issues such as transgender and homosexuality. The group is currently looking to partner with various organizations, experts and activists to help them further perfect their techniques.

It’s a unique idea, giving people the ability to not only walk a mile in another’s shoes, but to know what that actually feels like physically. I can foresee this sort of technology becoming a part of sensitivity training in the future, and even as education for sex offenders and hate criminals. Currently, such training focuses on getting offenders to empathize with their victims.

What better way to do that than making them see exactly what it’s like to be them? And in the meantime, enjoy this video of the Machine To Be Another in action:

Of all the important new gadgets to make it to the Consumer Electronics Show this year, one stood out as far as morning joggers and fitness gurus were concerned. It’s called the Fitbit Flex, an activity tracker designed to be worn all day and monitor movement, sleep, and calories burned. In an age where electronics are getting more personal, flexible, and wearable, it seems that fitness industry is determined not to be left behind.

While the concept of a wearable fitness tracker is not entirely new, the Flex incorporates a number of new developments in the field of personalized technology. For starters, as the name suggests, its a flexible bracelet that is comfortable enough to be worn all day long and malleable enough to stay firmly wrapped around your wrist. And unlike pedometers or heart rate monitors which monitor a single vital function or activity, the Flex is designed to monitor all simultaneously and in terms of the individuals stated fitness goals.

And to top it all off, the band uses a wireless Bluetooth connection to sync with PCs and smartphones. This last aspect is something Fitbit is quite proud off, as the Flex is the first fitness band to sync using the latest Bluetooth 4.0 standard. In addition, the company has announced that it will eventually support Bluetooth syncing of fitness data with Android devices once an update becomes available, hopefully by late January or early February.

Already, other companies have released fitness monitors similar to this new product. The Nike Fuelband is one such competitor, a flexible band that also used LED lights to indicate heart rate, distance, and overall fitness performance. It is also designed to sync up with mobile devices using the Nike+ iPod accessory. What’s more, the company claims that the band and a users Nike+ account will keep long-term track of a person’s fitness and offer incentives (such as awards badges) and motivational tips.

A third contender is the Jawbone Up band, another monitoring band that is even slimmer and more ergonic, as far as wearing it all day is concerned. Like it’s co-competitors, it too is syncable to an iPhone thanks to its specialized app. But unlike the others, it is designed to literally be worn 24/7, thus painting a more complete picture of a person’s health and fitness. What’s more, it has no screen, making its results only available through syncing.

All told, these bands and those like them range in cost from $100 to $269.99, and are somewhat limited in that not all are Bluetooth capable or able to link up with devices other than iPhones or unless you have an account with them (Nike+ being the big example here). But of course, that’s par for the course when it comes to competition between designers, who only want you to use their products and those they have business ties with.

All that aside, these and other products like them made a big impact at CES this year because they signaled that the fitness industry is on board with some of the latest trends and innovations. As technology continues to improve, we can expect more and more of our needs and wants to be handled by portable, wearable and (coming soon!) implantable electronics that are capable of interfacing with external computers to monitor, store and share our data.