Of all the important new gadgets to make it to the Consumer Electronics Show this year, one stood out as far as morning joggers and fitness gurus were concerned. It’s called the Fitbit Flex, an activity tracker designed to be worn all day and monitor movement, sleep, and calories burned. In an age where electronics are getting more personal, flexible, and wearable, it seems that fitness industry is determined not to be left behind.

While the concept of a wearable fitness tracker is not entirely new, the Flex incorporates a number of new developments in the field of personalized technology. For starters, as the name suggests, its a flexible bracelet that is comfortable enough to be worn all day long and malleable enough to stay firmly wrapped around your wrist. And unlike pedometers or heart rate monitors which monitor a single vital function or activity, the Flex is designed to monitor all simultaneously and in terms of the individuals stated fitness goals.

And to top it all off, the band uses a wireless Bluetooth connection to sync with PCs and smartphones. This last aspect is something Fitbit is quite proud off, as the Flex is the first fitness band to sync using the latest Bluetooth 4.0 standard. In addition, the company has announced that it will eventually support Bluetooth syncing of fitness data with Android devices once an update becomes available, hopefully by late January or early February. 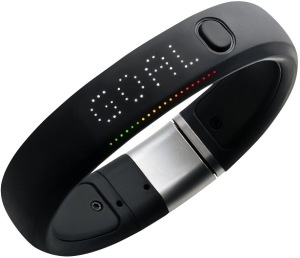 Already, other companies have released fitness monitors similar to this new product. The Nike Fuelband is one such competitor, a flexible band that also used LED lights to indicate heart rate, distance, and overall fitness performance. It is also designed to sync up with mobile devices using the Nike+ iPod accessory. What’s more, the company claims that the band and a users Nike+ account will keep long-term track of a person’s fitness and offer incentives (such as awards badges) and motivational tips. 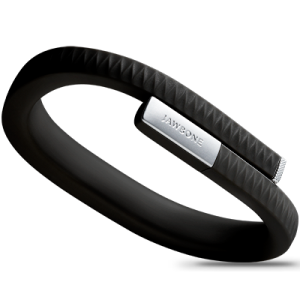 A third contender is the Jawbone Up band, another monitoring band that is even slimmer and more ergonic, as far as wearing it all day is concerned. Like it’s co-competitors, it too is syncable to an iPhone thanks to its specialized app. But unlike the others, it is designed to literally be worn 24/7, thus painting a more complete picture of a person’s health and fitness. What’s more, it has no screen, making its results only available through syncing.

All told, these bands and those like them range in cost from $100 to $269.99, and are somewhat limited in that not all are Bluetooth capable or able to link up with devices other than iPhones or unless you have an account with them (Nike+ being the big example here). But of course, that’s par for the course when it comes to competition between designers, who only want you to use their products and those they have business ties with.

All that aside, these and other products like them made a big impact at CES this year because they signaled that the fitness industry is on board with some of the latest trends and innovations. As technology continues to improve, we can expect more and more of our needs and wants to be handled by portable, wearable and (coming soon!) implantable electronics that are capable of interfacing with external computers to monitor, store and share our data.

8 thoughts on “The Future is Here: The Personal Fitness Band”