Many of these will look familiar, and for good reason. In addition to being futuristic looking, they also happen to be real! For many years, science fiction movies and series have used weapons of legitimate manufacture in order to inspire a futuristic feel.

Here’s a gun that has been featured in several movies, games and television series, and its obvious why. Just look at the thing. A fully-automatic pistol, this baby provides a lot of firepower in a small and uniquely shaped package. As one of the first personal defense weapons to feature a top-mounted magazine, a revolutionary concept for its time which has since caught on bigtime.

Guns of this class were featured in the sci-fi movies Robocop 2, Robocop 3, Total Recall, Virtuosity, and Star Trek: First Contact.

This gun not only looks futuristic, it is downright revolutionary in its design. Whereas most assault rifles have grenade launchers slug underneath the front barrel, this version carries an launcher mounted on top and fed by a bullpup magazine.

Designed by the Republic of South Korea in 2006, the weapon also comes with a state of the art scope which features the latest in a ballistics computer technology as well as thermal/night vision. I have yet to find a sci-fi franchise which has used it, but time will tell. These things aint cheap, after all!

As part of the new generation of bullpup assault rifles, the F2000 is of Belgian manufacture that’s been around for the better part of a decade. It’s futuristic features include the revolutionary new handle and trigger grip, bullpup magazine and updated sights.

Because of its aesthetic appeal, the F2000 has been featured in numerous places, including Terminator: Salvation, the Modern Warfare and Ghost Recon video game series, and the upcoming G.I. Joe: Rise of Cobra.

Also known as an OICW (Objective Individual Combat Weapon), the XM29 is part of the new generation of hybrid assault rifles that features the a secondary bullpup magazine which houses its compliment of grenades.

Much like the K11, this weapon combines the benefits of a 5.56mm assault rifle, a 20mm grenade launcher and an ultra-modern scope that contains a ballistics computer, laser range finder, advanced optics and night vision. It was featured in the Ghost Recon series, Die Another Day, and Universal Soldier: The Return.

When I first saw this weapon, all I could say was “Wow, now there’s something that doesn’t qualify for home defense!” A .45 caliber weapon, fully automatic, and very compact, this weapon is futuristic, uniquely designed and deadly. A triple threat, quite literally!

And the list of features and featurettes include the upcoming Total Recall remake, Resident Evil: Retribution, the Nikita television series and the Modern Warfare and Ghost Recon game franchises.

Here we have a game changer! And interestingly enough, it’s been around for quite some time. Back in 1985, Mossberg decided to upgrade their long lineup of shotgun stocks by taking advantage of the concept of bullpup firearms. Essentially, this means that it is loaded from the rear and ejects spent cartridges from behind the trigger mechanism.

Given it’s futuristic look, it was featured in several sci-fi movies during the 80’s and 90’s, most notably The Running Man, Predator 2, and the film version of Stargate. 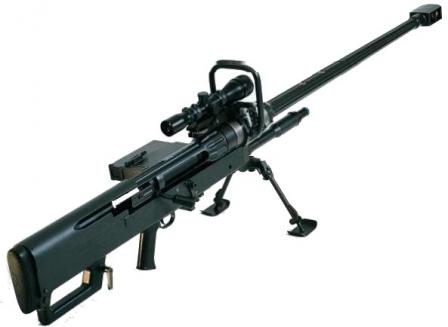 Go big or go home! That seems to be the reasoning behind this 20mm (.78 cal) assault rifle, which comes direct from South Africa, famous purveyor of grisly firearms! As part of an international series of large-caliber rifles which emerged during the 1990’s, this weapon was meant to give snipers the ability to take down armored troops and vehicles. Well, it certainly does that!

In addition to appearing in the movie District 9, it was also featured in the Halo series as the USNC sniper’s rifle. And anyone’s who played that series knows just how powerful that baby is. Blamoo! They all fall down… 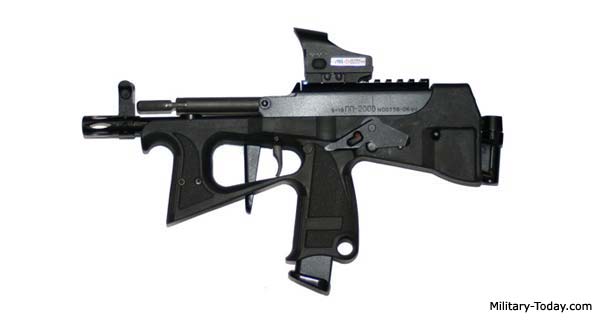 Next up, the Russian sidearm of choice for today’s military, police forces, and apparently even cilivians. At least that’s what the designation PDW (Personal Defense Weapon) means. Can’t imagine most houses have any real cause for stocking a 9mm submachine gun, but that’s a matter for the courts.

Because of it’s appearance and popularity with modern armed forces, it was features in the video game series’ Modern Warfare, Ghost Recon, Bad Company, SOCOM, and the Russian sci-fi thriller The Interceptor (Zapreshchyonnaya Realnost).

Here we have yet another PDW that really doesn’t seem to fit that criteria, not when its a compact submachinegun and packs as many as 50 bullets! And in addition to its ammo count, it also boasts two very high-tech advancements, including a top loading magazine and the same handle/trigger grip as the F2000. Not surprising since they have the same maker – Fabrique Nationale (FN) from Belgium.

For obvious reasons, this gun has a long history of making special appearances. Its credits include Equilibrium, I, Robot, Babylon A.D., District B13 and its sequel, and was specifically chosen to be the sidearm of choice on the shows Stargate and Stargate: Atlantis.

Another popular item, and one which I’m sure everyone out there is familiar with. Invented back in 1978 by the Austrian-based Steyr company, this weapon was the first assault rifle to introduce the bullpup loading design. On top of that, its appearance is downright futuristic!

It too has a long list of credits, including Robocop 1 and 2, Predator 2, District B13, as well as the television shows Red Dwarf, Space: Above and Beyond, and Firefly.

Okay! There’s more, of course, but ten examples is kind of my limit. And because I think something like this could go longer than I’m willing to type… at least in one sitting. Enjoy the gun show (no bad pun!) and see y’all next time.