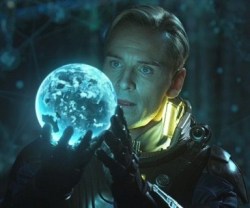 Also known as “David 8”, the first in the line of Weyland Industries fully functional AI’s, which have the ability to proximate human emotions, even though they cannot experience them. In addition to his impressive machine intelligence, he also comes equipped with a characteristic intrinsic to all Alien androids – moral flexibility!

Yes, in addition to assimilating all known info on Indo-European languages, the “Engineers” biology, and the nature of their bio-weapons, he also managed to unleash the bio-weapon within a human crew just to shake things up! And he did it all on the orders of Mr. Weyland himself, mainly so to help him find a way to cheat death.

In the end, David didn’t prove to be all bad. After having his head ripped off by an Engineer and witnessing Weyland’s death, he went on to help save Dr. Shaw and agreed to assist her in her mission to find the homeworld of the engineers. But that didn’t come as a huge surprise. As he had intimated to Shaw earlier in the movie, the death of Weyland would set him free. Once free, he became a much nicer guy! 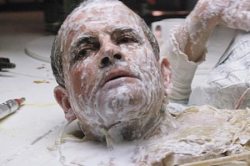 The same cannot be said for this next example, who comes to us from the original Alien movie. Originally thought to be a human who served as the Nostromo’s chief medical officer, Ash was revealed to be a synthetic that was taking his orders directly from the ship’s AI, which in turn was instructing him to follow company’s directives. And all who say him in the first movie can agree, this particular android was a complete and utter douche!

Not only was he willing to let the cry did in order to get the Xenomorph back to his handler’s alive, he tried to kill Ripley when she found out and even expressed open admiration for the Xenomorph. “I admire its purity,” he said. “A survivor… unclouded by conscience, remorse, or delusions of morality.” Jackass! Needless to say, Ripley’s experience with this synthetic severely soured her towards all androids.

Luckily, this next example was able to restore Ripley’s faith. As the Sulaco’s android executive officer, he was responsible for planetary maneuvering, but also acted as the away team’s science officer and performed various other functions as well. But unlike Ash, he was unable to allow harm to come to humans thanks to the inclusion of his “behavioural inhibitors”, which were tantamount to Asimov’s Three Laws.

Also unlike Ash, Bishop was loyal to the crew of the Sulaco and to Ripley in particular. When Burke tried to circumvent military authority and order Bishop to preserve the alien specimens, he alerted Ripley to the incongruity. He also managed to save Ripley and Newt from certain death when the Alien Queen had them cornered.

As if that wasn’t enough, he even prevented Newt when Ripley decompressed the Sulaco’s landing bay, and he was ripped in half at the time!

Taken from the universe of Alien: Resurrection, Annalee Call (aka. Call) was a secret “Auton” who managed to infiltrate a crew of mercenaries. This put her aboard the Auriga in time to meet Ripley 8, the clone produced by the military for the sake of resurrecting the Xenomorph species. After failing to kill Ripley before the Xenomorph could be extracted, she and the others were forced to band together to make it out alive.

Her agenda in all this was unclear, aside from a sense of displaced humanity which Ripley mocked when she said: “No human being is that humane”. As a member of the race of “second generation” synthetics known as “Autons”, which were apparently built by other machines, she was part of a dying species. Apparently, these synthetics were outlawed after they rebelled against their masters. Hmm, echoes of Blade Runner there; and by echoes I mean a total ripoff!

This next example comes from the expanded universe, specifically the 2001 game AVP 2. As the leader of Weyland-Yutani’s research facility on LV-1201, he was responsible for investigating the planet’s extensive ruins. This world was apparently discovered roughly a century and a half after events in the first movie, once the company traced the flight telemetry from the “Derelict” alien ship (aka. “Space Jockeys”/”Engineers”)

In the course of the game,it is revealed that Eisenberg was once human, and that during the initial mission to LV-1201, he was apparently the only survivor after a xenomorph attack. Due to terrible acid burns suffered during his rescue, he had his consciousness downloaded into an artificial body. As a result, he harbors a deep sense of fear of hatred for the xenomorphs, and unfortunately dies at their hands. 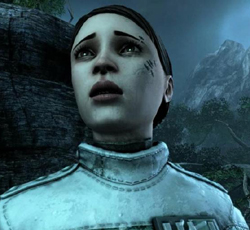 Here we have a synthetic who refuses to go by that or any other of the more progressive monickers, preferring the term android instead. As Weyland Yutani’s administrative android for the Freya’s Prospect colony, this example comes from the 2010 video game relaunch of AVP. After the colony went to hell after the xenomorph’s escaped and began wreaking havoc, she is the one who called in the Marines.

Due in part to her enhanced empathic and morality processing, she became intrinsic to helping the “Rookie” (i.e. the protagonists in the Marine campaign) contain the outbreak and get the last human survivors to safety. In so doing, she went against Weyland’s orders and company policy. Good thing she was there to help out, one would have to wonder if what the company was thinking stationing a conscientious android there…

The final example in this list also comes from the 2010 relaunch of AVP. As a descendent of the Charles Bishop Weyland, chairman of Weyland Industries, he was in charge of the facility on Freya’s Prospect and the director of the experiments involving the captured Xenomorphs. As such, he was also the main antagonist in the Marine campaign of the game.

Ultimately, his purpose in conducting research on Freya’s Prospect went far beyond breeding Xenomorphs. Within the planet’s jungles, and even more so beneath surface, Predator (aka. Hunter) ruins were discovered which he believed held ancient secrets, much of which was information about Hunter history, culture, and the Xenomorph itself.

By the end of the Marine campaign, the Weyland synthetic is killed and his research facility within the Hunter temple is destroyed. However, another android of the same make was still able to retrieve the information gleaned within, the most important part of which was the location of the Xenomorph homeworld.

Final Thoughts:
As you can see, the AI’s of Aliens have undergone some changes over the years. Beginning as conscienceless synthetics that seemed to admire the Xenomorph because it mirrored their amoral worldview, they went on to become the sympathetic characters who seemed, to quote another franchise, “more human than human”. Every other incarnation that has since appeared in the Alien and AVP franchises has been a reiteration of either of these concepts, being the tool of its corporate masters or a savior that was willing to risk its life to help its human brethren.

The one exception to this rule is also the most recent incarnation, Prometheus’ David. Of all the synthetics to inhabit the Alien or AVP universe, he is the only one who demonstrated both cold amorality and humanity. I believe Scott did this intentionally to provide a sense of synthesis to the characters of Ash and Bishop, honoring both archetypes as he attempted to return the Alien franchise to its roots.

Be they the kind of cold, calculating and inhumane androids that fueled our technophobia or the kind, gentle, and overtly “human” robots that made us question our own humanity, the Alien franchise certainly covered both ends of the spectrum in their portrayal of AI’s. Much like the Terminator franchise, they presented artificial intelligence as a double-edged sword, capable of being just as good and evil as any human being. And in the end, isn’t that really the point?

Recall how in Prometheus, Dr. Holloway told David “We built you because we could”? Well, that is only true to a point. Yes, new technologies are often is made simply because the means exist to do so. But the purpose in creating an artificial intelligence is to create life in our own image. And in the end, the consequences of that vanity is pretty obvious. Things created in our image will behave just like us, good and bad!

2 thoughts on ““Synthetics” and “Artificial Humans”, the AI’s of Alien!”