After reading four of the five of the books in the ongoing Song of Ice and Fire series, I’ve come to realize something. I really like the world George RR Martin has created! In fact, you might say I haven’t found myself becoming so engrossed with a fictional universe since Dune or Lord of the Rings. In those fictional universes, as with this one, one gets an incredible sense of depth, detail and characterization.

And in honor of this realization, or perhaps because I couldn’t keep track of the names, places and events alluded to in the texts, I began doing some serious research. For one, I found several lovely maps (like the one above) that speculate as to the complete geography of Martin’s world – the continents of Westeros, Essos, and Sothoryos.

And when I say complete geography, I mean just that, not the snippets that are given in the book that leave out the all important sections of Qarth, Slaver’s Bay, and the Free Cities. While these places are described in relation to the rest of the world, keeping track of them can be tricky, especially if you’re a visual learner like myself! And seeing as how much of the story involves a great deal of travel, it helps to know where characters were going, how far, and which direction they were headed.

Even before I began reading the books, I could tell that Westeros was very much inspired by the British Isles, with its tough and grizzled Northerners resembling the Scots, Picts, and Celts of old while the Southerners were more akin to the aristocratic Normans. “The Wall” was also a clear allegory for Hadrian’s Wall, with the people on the other side being portrayed much as the Roman’s would have viewed the “Northern Tribes” that threatened their domain.

King’s Landing also seemed very much inspired by London, with its pomp, opulence, and extensive moral decay. Yes, just like London of the Middle Ages, it was a fine patchwork of royal finery, castles, fortifications, religious ceremony, brothels and public executions! And it even lies upon a large river, the Blackwater, which seems every bit like the Thames.

Essos also seemed very much inspired by Asia of ancient lore. Here we had the Dothraki Sea where the Dothraki horsemen roamed free and pillaged in all directions, exacting tribute and taking slaves. Can you say Mongols and/or Huns? In addition, their capital – Vaes Dothrak – seemed in every respect to be an adaptation of Karakorum, Ghengis Khan’s one time capitol that was little more than a collection of temporary houses and tents. And Master Ilyrio, as if his name wasn’t enough, seemed to be every bit a Mediterranean at heart, living in a lavish sea-side estate and growing fat of off trade in cheese, olives and wine.

Upon cracking the books, I found that the metaphors only went deeper. In fact, they were so thick, you could cut them with a knife! In terms of Westerosi geography and character, the different regions of the continent called to mind all kind’s of archetypes and real-world examples. The Reach sounds very much like Cornwall, fertile, populous, and in the south-east relative to the capitol. Casterly Rock and the domain of the Lannister’s, though it resides in the west away from the capitol, seems every bit like Kent, the wealthiest region of old where the most lucrative trade and shipping comes in. And their colors, gold and red, are nothing if not symbolic of the House of Lancaster – of which Henry V and the VIII were descended.

And last, but certainly not least, there were the all-important cities of Qarth, Mereen, Astapor, and Yunkai. All eastern cities that inspire images of ancient Babylon, Cairo, Istanbul, Jerusalem and Antioch. With their stepped pyramids, ancient history, flamboyant sense of fashion, and lucrative slave trade, they all sounded like perfect examples of the ancient and “decadent” eastern civilizations that were described by Plato, Aristotle, and medieval scholars. The conquest of Westeros by the First Men, the Children of the Forest, the Andal and Valyrian Conquest; these too call to mind real history and how waves of conquerors and settlers from the east came to populate the Old World and the New, with genocide and assimilation following in their wake and giving rise to the world that we know today. 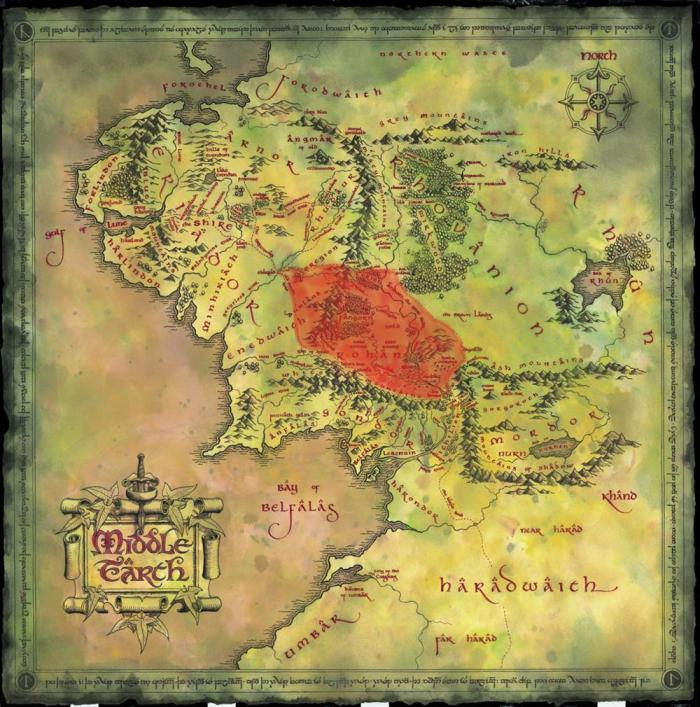 Fans of Tolkien will no doubt be reminded of the map of Middle Earth, and for good reason. Martin’s knack for writing about space and place and how it plays a central role in the character of its inhabitants was comparable to that of Tolkien’s. And what’s more, the places have a very strong allegorical relationship to real places in real history.

In Tokien’s world, the Shire of the Hobbits seemed very much the metaphor for pre-industrial rural England. The inhabitants are these small, quirky people who are proud of their ways, lavish in their customs, and don’t care much for the affairs of the outside world. However, when challenged, they are capable of great things and can move heaven and earth.

In that respect, Gondor to the south could be seen as London in the early 20th century – the seat of a once proud empire that is now in decline. Given it’s aesthetics and location relative to the dark, hostile forces coming from the East and South, it’s also comparable to Athens and Rome of Antiquity.

And it was no mistake that the battle to decide the fate of Middle Earth happened here. In many ways it resembles the Barbarian Invasions of the late Roman Empire, the Persian Wars of Classical Greece, the Mongol Invasions or the Byzatine Empire’s war with the Turks in the High Middle Ages. In all cases, classical powers and the home of Western civilization are being threatened from Eastern Empires that are strange and exotic to them.

And let’s not forget Arrakis (aka. Dune) by Frank Herbert. Here too, we have a case where space and place are determining factors on their residents. And whereas several planets are described and even mapped out in the series, none were as detailed or as central as Arrakis itself. From its Deep Desert to its Shield Walls, from Arrakeen and Seitch Tabr; the planet was a highly detailed place, and the divide between Imperials and Fremen were played out in the ways both sides lived.

Whereas the Fremen were hardy folk who lived in the deep desert, took nothing for granted, and were a harsh folk sustained by prophecies and long-term goals, the Imperials were lavish people, pompous and arrogant, and used to doing things in accordance with the Great Convention. But far from being preachy or one-sided, Herbert showed the balance in this equation when it became clear that whereas the Imperials were governed by convention and thereby complacent, the Fremen were extremely dangerous and capable of terrible brutality when unleashed.

But as I said, other planets are also detailed and the influence their environments have on their people are made clear. Caladan was the ancestral home of the Atreides, covered in oceans, fertile continents, and a mild climate that many consider to be a paradise. As a result, according to Paul,  the Atreides grew soft, and it was for this reason that they fell prey to the Emperor’s betrayal and the machinations of their Harkonnen enemies.

And speaking of the Harkonnens, the world of Geidi Prime is described on a few occasions in the series as being an industrial wasteland, a world plundered for its resources and its people reduced to a status of punitive serfdom. What better metaphor is there for a people guided by sick pleasures, exploitation, and exceptional greed? Whereas the Atreides grew soft from their pleasures, the Harkonnens grew fat, and were therefore easily slaughtered by Paul and his Fremen once their rebellion was underway.

And of course, there is Selusa Secundus, a radioactive wasteland where the Emperor’s elite Sardukar armies are trained. On this prison planet, life is hard, bleak, and those who survive do so by being ruthless, cunning and without remorse. As a result, they are perfect recruits for the Emperor’s dreaded army, which keeps the peace through shear force of terror.

There’s something to be said for imaginative people creating dense, richly detailed worlds isn’t there? Not only can it be engrossing and entertaining; but sooner or later, you find yourself looking back at all that you’ve surveyed, you do a little added research to get a greater sense of all that’s there, and you realize just how freaking expansive the world really is. And of course, you begin to see the inspiration at the heart of it all.

Yes, this is the definitely the third time I’ve experienced this feeling in relation to a series. I count myself as lucky, and really hope to do the same someday. I thought I had with the whole Legacies concept, but I’m still tinkering with that one and I consider my research into what makes for a great sci-fi universe to be incomplete. Soon enough though, I shall make my greatest and final attempt, and there will be no prisoners on that day! A universe shall be borne of my pen, or not… Either way, I plan to blab endlessly about it 😉