When it comes to enhancement technology, DARPA has its hands in many programs designed to augment a soldier’s senses. Their latest invention, the telescopic contact lens, is just one of many, but it may be the most impressive to date. Not only is it capable of giving soldiers the ability to spot and focus in on faraway objects, it may also have numerous civilian applications as well.

The lens is the result of collaboration between researchers from the University of California San Diego, Ecole Polytechnique Federale de Lausanne in Switzerland, and the Pacific Science & Engineering Group, with the financial assistance of DARPA. Led by Joseph Ford of UCSD and Eric Tremblay of EPFL, the development of the lens was announced in a recent article entitled “Switchable telescopic contact lens” that appeared in the Optics Express journal.

In addition to being just over a millimeter thick, the lens works by using a series of tiny mirrors to magnify light, and can be switched between normal and telescopic vision, which is due to the lens having two distinct regions. The first The center of the lens allows light to pass straight through, providing normal vision. The outside edge, however, acts as a telescope capable of magnifying your sight by close to a factor of three.

Above all, the main breakthrough here is that this telescopic contact lens is just 1.17mm thick, allowing it to be comfortably worn. Other attempts at granting telescopic vision have included a 4.4mm-thick contact lens (too thick for real-world use), telescopic spectacles (cumbersome and ugly), and most recently a telescopic lens implanted into the eye itself. The latter is currently the best option currently available, but it requires surgery and the image quality isn’t excellent. 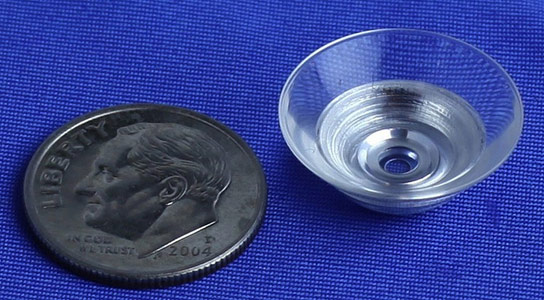 To accomplish this feet of micro-engineering, the researchers had to be rather creative. The light that will be magnified enters the edge of the contact lens, is bounced around four times inside the lens using patterned aluminum mirrors, and then beamed to the edge of the retina at the back of your eyeball. Or as the research team put it in their article:

The magnified optical path incorporates a telescopic arrangement of positive and negative annular concentric reflectors to achieve 2.8x magnification on the eye, while light passing through a central clear aperture provides unmagnified vision.

To switch between normal and telescopic vision, the central, unmagnified region of the contact lens has a polarizing filter in front of it — which works in tandem with a pair of 3D TV spectacles. By switching the polarizing state of the spectacles – a pair of active, liquid crystal Samsung 3D specs in this case – the user can choose between normal and magnified vision.

Though the project is being funded by DARPA for military use, the research team also indicated that the real long-term benefits of a device like this one come in the form of civilian and commercial applications. For those people suffering from age-related macular degeneration (AMD) – a leading cause of blindness for older adults – this lens could be used to correct for vision loss.

As always, enhancement technology is a two-edged sword. Devices and systems that are created to address disabilities and limitations have the added benefit of augmenting people who are otherwise healthy and ambulatory. The reverse is also true, with specialized machines that can make a person stronger, faster, and more aware providing amputees and physically challenged people the ability to overcome these imposed limitations.

However, before anyone starts thinking that all they need to slip on a pair of these to get superhero-like vision, there are certain limitations. As already stated, the lens doesn’t work on its own but needs to be paired with a modified set of 3D television glasses for it to work. Simply placing it on the pupil and expecting magnified vision is yet not an option.

Also, though the device has been tested using computer modeling and by attaching a prototype lens to a optomechanical model eye, it has not been tested on a set of human eyes just yet. As always, there is still a lot of work to do with refining the technology and improving the image quality, but it’s clear at this early juncture that the work holds a lot of promise.

It’s the age of bionic enhancements people, are we find ourselves at the forefront of it. As time goes on, we can expect such devices to become a regular feature of our society.