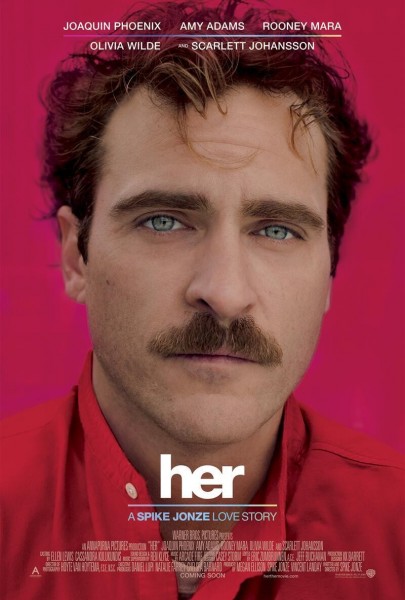 The first trailer for the upcoming movie Her has arrived, a movie about a writer that finds himself falling in love with his household AI. Written and directed by Spike Jonze (Being John Malkovitch, Adaptation, Where the Wild Things Are, and somehow, Jackass), the movie stars a mustachioed Joaquin Phoenix as a lonely writer and Scarlett Johansson as the voice of the AI Samantha.

Before you go thinking this is a totally creepy and weird concept, the movie trailer actually does the idea justice – examining the nature of relationships and what it means to be in love. And of course, it’s not all one way. Whereas Phoenix’s character Theodore is a recent divorcee who believes he’s found a true love in Samantha, she is a new life form that learns what love is through her relationship with him.

Her will open in a limited release this November, and I’m actually interesting in seeing it. It would be nice to see a movie where the AI’s aren’t defined by their creepy red eye or are constantly trying to kill us!

3 thoughts on “New Movie Trailer: Her”