Vertical Take-Off and Landing craft have been the subject of military developers for some time. In addition to being able to deploy from landing strips that are damaged or small for conventional aircraft, they are also able to navigate terrain and land where other craft cannot. Add to that the ability to hover and fly close to the ground, and you have a craft that can also provide support while avoiding IEDs and landmines.

One concept that incorporates all of these features is the AirMule, a compact, unmanned, single-engine vehicle that is being developed by Tactical Robotics in Israel. In January of 2013, the company unveiled the prototype which they claimed was created for the sake of supporting military personnel,  evacuating the wounded, and conducting remote reconnaissance missions. 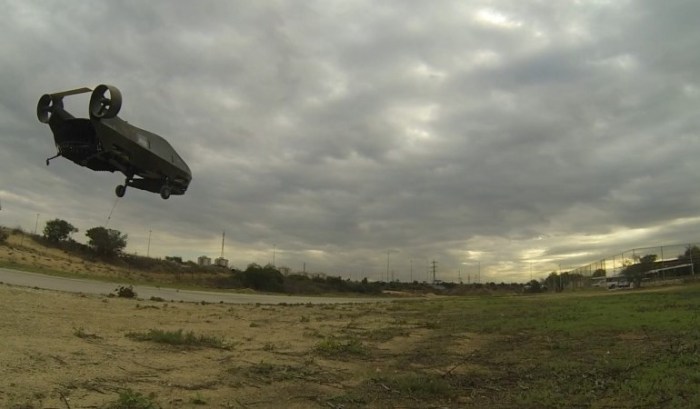 Now, less than a year later, the company conducted a demonstration with their prototype aircraft recently demonstrated its ability to fly autonomously, bringing it one step closer to carrying out a full mission demo. During the test, which took place in December, the craft autonomously performed a vertical take-off, flew to the end of a runway, then turned around on the spot and flew back to its starting point.

All the while, it maintained altitude using two laser altimeters, while maintaining positioning via a combination of GPS, an inertial navigation system, and optical reference to markers on the ground. These autonomous systems, which allow it to fly on its own, can also be countermanded in favor of remote control, in case a mission seems particularly harry and requires a human controller.

In short, it has a better mass to carrying capacity ratio than a helicopter, comparable performance, and can land and take-off within an area of 40 square meters (430.5 sq ft), which is significantly smaller than what a manned helicopter requires for a safe landing. The internal rotor blades are reportedly also much quieter than those of a helicopter, giving the matte-black AirMule some added stealth.

Plans now call for “full mission demonstrations” next year, utilizing a second prototype that is currently under construction. And when complete, this vehicle and those like it can expected to be deployed to many areas of the world, assisting Coalition and other forces in dirty, dangerous environments where landmines, IEDs and other man-made and natural hazards are common.

Alongside machines like the Alpha Dog, LS3 or Wildcat, machines that were built by Boston Dynamics (recently acquired by Google) to offer transport and support to infantry in difficult terrain, efforts to “unman the front lines” through the use of autonomous drones or remote-controlled robots continue. Clearly, the future battlefield is a place where robots where will be offering a rather big hand!

And be sure to check this video of the AirMule demonstration, showing the vehicle take-off, hover, fly around, and then come in for a landing: