Here we have two more stories from last year that I find I can’t move on without posting about them. And considering just how relevant they are to the field of biomedicine, there was no way I could let them go unheeded. Not only are developments such as these likely to save lives, they are also part of a much-anticipated era where mortality will be a nuisance rather than an inevitability.

The first story comes to us from the University of New South Wales (UNSW) in Australia and the Harvard Medical School, where a joint effort achieved a major step towards the dream of clinical immortality. In the course of experimenting on mice, the researchers managed to reverse the effects of aging in mice using an approach that restores communication between a cell’s mitochondria and nucleus.

Mitochondria are the power supply for a cell, generating the energy required for key biological functions. When communication breaks down between mitochondria and the cell’s control center (the nucleus), the effects of aging accelerate. Led by David Sinclair, a professor from UNSW Medicine at Harvard Medical School, the team found that by restoring this molecular communication, aging could not only be slowed, but reversed.

Responsible for this breakdown is a decline of the chemical Nicotinamide Adenine Dinucleotide (or NAD). By increasing amounts of a compound used by the cell to produce NAD, Professor Sinclair found that he and his team could quickly repair mitochondrial function. Key indicators of aging, such as insulin resistance, inflammation and muscle wasting, showed extensive improvement. 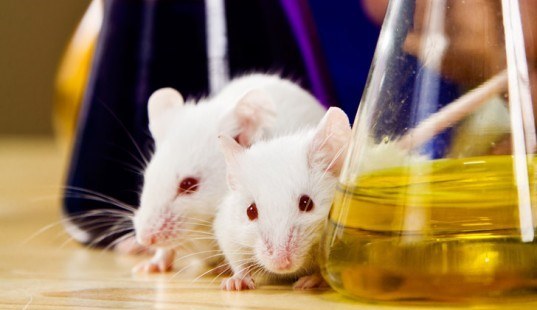 In fact, the researchers found that the tissue of two-year-old mice given the NAD-producing compound for just one week resembled that of six-month-old mice. They said that this is comparable to a 60-year-old human converting to a 20-year-old in these specific areas. As Dr Nigel Turner, an ARC Future Fellow from UNSW’s Department of Pharmacology and co-author of the team’s research paper, said:

It was shocking how quickly it happened. If the compound is administered early enough in the aging process, in just a week, the muscles of the older mice were indistinguishable from the younger animals.

The technique has implications for treating cancer, type 2 diabetes, muscle wasting, inflammatory and mitochondrial diseases as well as anti-aging. Sinclair and his team are now looking at the longer-term outcomes of the NAD-producing compound in mice and how it affects them as a whole. And with the researchers hoping to begin human clinical trials in 2014, some major medical breakthroughs could be just around the corner. 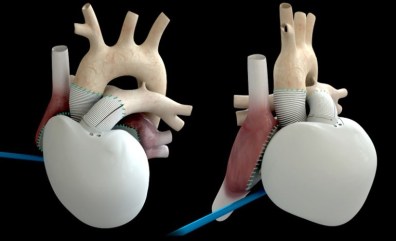 In another interesting medical story, back in mid-December, a 75 year-old man in Paris became the  recipient of the world’s first Carmat bioprosthetic artificial heart. Now technically, artificial hearts have been in use since the 1980’s. But what sets this particular heart apart, according to its inventor – cardiac surgeon Alain Carpentier – is the Carmat is the first artificial heart to be self-regulating.

In this case, self-regulating refers to the Carmat’s ability to speed or slow its flow rate based on the patient’s physiological needs. For example, if they’re performing a vigorous physical activity, the heart will respond by beating faster. This is made possible via “multiple miniature embedded sensors” and proprietary algorithms running on its integrated microprocessor. Power comes from an external lithium-ion battery pack worn by the patient, and a fuel cell is in the works. 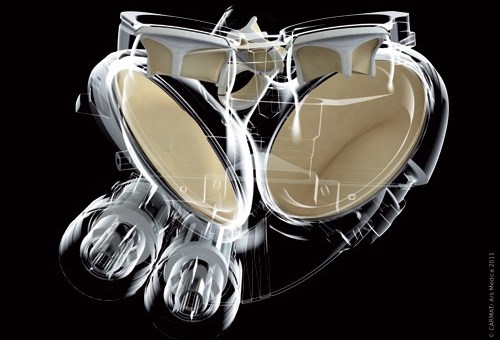 Most other artificial hearts beat at a constant unchanging rate, which means that patients either have to avoid too much activity, or risk becoming exhausted quickly. In the course of its human trials, it will be judged based on its ability to keep patients with heart failure alive for a month, but the final version is being designed to operate for five years.

The current lone recipient is reported to be recuperating in intensive care at Paris’ Georges Pompidou European Hospital, where he is awake and carrying on conversations. “We are delighted with this first implant, although it is premature to draw conclusions given that a single implant has been performed and that we are in the early postoperative phase,” says Carmat CEO Marcello Conviti. 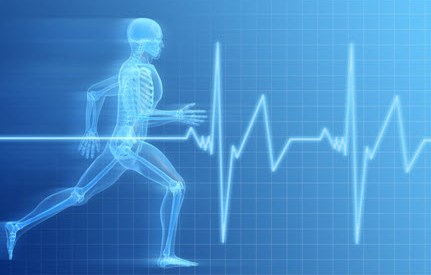 According to a Reuters report, although the Carmat is similar in size to a natural adult human heart, it’s is somewhat larger and almost three times as heavy – weighing in at approximately 900 grams (2 lb). It should therefore fit inside 86 percent of men, but only 20 percent of women. That said, the company has stated that a smaller model could be made in time.

In the meantime, it’s still a matter of making sure the self-regulating bioprosthetic actually works and prolongs the life of patients who are in the final stages of heart failure. Assuming the trials go well, the Carmat is expected to be available within the European Union by early 2015, priced at between 140,000 and 180,000 euros, which works out to $190,000 – $250,000 US.

See what I mean? From anti-aging to artificial organs, the war on death proceeds apace. Some will naturally wonder if that’s a war meant to be fought, or an inevitably worth mitigating. Good questions, and one’s which we can expect to address at length as the 21st century progresses…