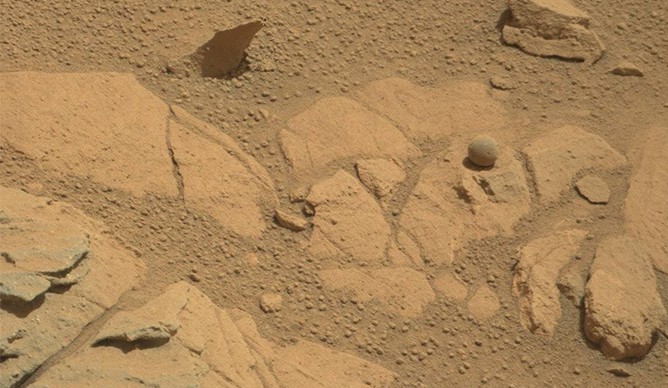 The rocky surface of Mars has turned up some rather interestingly-shaped objects in the past. First there was the Martian rat, followed shortly thereafter by the Martian donut; and very recently, the Martian thighbone. And in this latest case, the Curiosity rover has spotted what appears to be a perfectly-round ball. Even more interesting is the fact that this sphere may be yet another indication of Mars’ watery past.

The rock ball was photographed on Sept. 11 – on Sol 746 of the rover’s mission on Mars – while Curiosity was exploring the Gale Crater. One of Curiosity’s cameras captured several images of the centimeter-wide ball as part of the stream of photographs was taking. The scientists working at the Mars Science Laboratory based at NASA’s Jet Propulsion Laboratory (JPL), immediately began to examine it for indications of what it could be.

As Ian O’Neill of Discovery News, who spoke with NASA after the discovery, wrote:

According to MSL scientists based at NASA’s Jet Propulsion Laboratory (JPL) in Pasadena, Calif., the ball isn’t as big as it looks — it’s approximately one centimeter wide. Their explanation is that it is most likely something known as a “concretion”… and they were created during sedimentary rock formation when Mars was abundant in liquid water many millions of years ago.

Curiosity has already found evidence of water at a dig site in Yellowknife Bay, which took place shortly after it landed in the Gale Crater two years ago. In addition, this is not the first time a Mars rover has found rocky spheres while examining the surface. In 2004, NASA’s Opportunity rover photographed a group of tiny balls made of a ferrous mineral called hematite. Opportunity photographed still more spheres, of a different composition, eight years later. 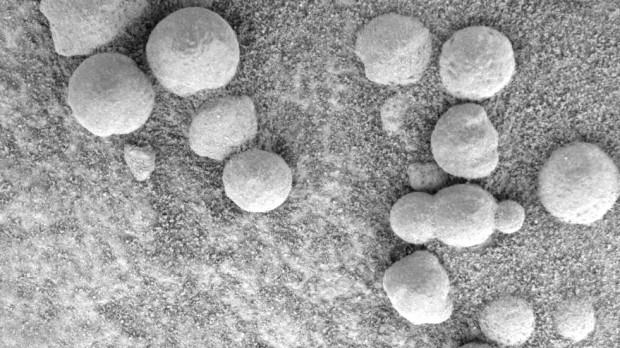 The spheres likely formed through a process called “concretion”, where minerals precipitate within sedimentary rock, often into oval or spherical shapes. When the rock erodes due to wind or water, it leaves the balls of minerals behind and exposed. If in fact concretion caused the Mars spheres, then they would be evidence there was once water on the planet. However, some scientists believe the rock balls might be leftover from meteorites that broke up in the Martian atmosphere.

Curiosity is now at the base of Mount Sharp (Aeolis Mons) – The 5.6 km-high (3.5 mile) mountain in the center of Gale Crater – scientists are excited to commence the rover’s main science goal. This will consists of more drilling into layered rock and examining the powder so scientist can gain an idea about how habitable the Red Planet was throughout its ancient history, and whether or not it may have been able to support microbial life.

Mission managers will need to be careful as the rover has battered wheels from rougher terrain than expected. Because of this, the rover will slowly climb the slope of Mount Sharp driving backwards, so as to minimize the chance of any further damage. The Mars Reconnaissance Orbiter (MRO) will also be on hand to help, photographing the route from above to find the smoothest routes.

Despite the wear and tear that the little rover has experienced in its two years on the Martian surface, it has discovered some amazing things and NASA scientists anticipate that it will accomplish much more in the course of its operational history. And as it carried on with its mission to decode the secrets of Mars, we can expect it will find lots more interesting rocks – spherical, rat-shaped, ringed, femur-like, or otherwise.

One thought on “News from Mars: Mysterious Martian Ball Found!”