Of the many advances made by medical science in the past century, vaccinations are arguably the greatest. With the ability to inoculate people against infection, diseases like yellow fever, measles, rubella, mumps, typhoid, tetanus, polio, tuberculosis, and even the common flu have become controllable – if not eliminated. Nevertheless, medical researchers agree that there are still some things that can be improved upon when it comes to vaccinations.

Beyond the controversies surrounding a supposed link between vaccinations and autism, there is the simple fact that the current method of inoculating people is rather invasive. Basically, it requires people to sit through the rather uncomfortable process of being stuck with a needle, oftentimes in an uncomfortable place (like the shoulder). Luckily, many researchers are working on a way to immunize people using gentler methods. 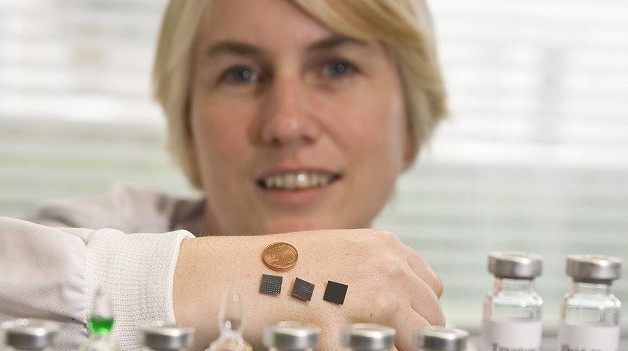 At the University College Cork in Ireland, for example, scientists have just finished pre-clinical testing on an experimental malaria vaccine that is delivered through the skin. To deliver the vaccine into the body, the researchers used a skin patch with arrays of tiny silicon microneedles that painlessly create temporary pores. These pores provide an entry point for the vaccine to flow into the skin, as the patch dissolves and releases the drug.

To make the vaccine, the team used a live adenovirus similar to the virus that causes the common cold, but which they engineered to be safer and produce the same protein as the parasite that causes malaria. Adenoviruses are one of the most powerful vaccine platforms scientists have tested, and the one they used produced strong immunity responses to the malaria antigen with lower doses of the vaccine.

The research showed that the administration of the vaccine with the microneedle patch solves a shortcoming related to this type of vaccine, which is inducing immunity to the viral vector – that is, to the vaccine itself. By overcoming this obstacle, the logistics and costs of vaccination could be simpler and cheaper as it would not require boosters to be made with different strains. Besides, with no needles or pain involved, there’s bigger potential to reach more people requiring inoculation.

This is similar to the array used by researchers at King’s College in London, who are also developing a patch for possible HIV vaccine delivery. Researchers at University of Washington used a similar method last year to deliver the tuberculosis vaccine. The method is an improvement on this type of vaccine delivery since it is painless and non-invasive. It’s use is also being researched in relation to other infections, including Ebola and HIV.

The details of the research appeared in the journal Nature. Lead researcher, Dr. Anne Moore, is set to negotiate with Silicon Valley investors and technology companies to commercialize the vaccine.