As a nerd and historian, I am obliged to share these latest Epic Rap Battles of History videos. First up, there’s Sir Isaac Newton Vs. Bill Nye. In addition to being funny, I think it set a record for most featured performers. These included Weird Al Yankovic in the role of Sir Isaac Newton and hip-hop artist Chali 2na in the role of Neil deGrasse Tyson, who jumps in at the fourth verse to give Bill Nye some much needed assistance.

Second, there’s the battle between revolutionaries George Washington vs. William Wallace. While this one didn’t feature anyone famous, it was some of Nice Peter and EpicLLOYD’s best work. And like all of their best videos, it is both educational and classically hilarious! Enjoy! 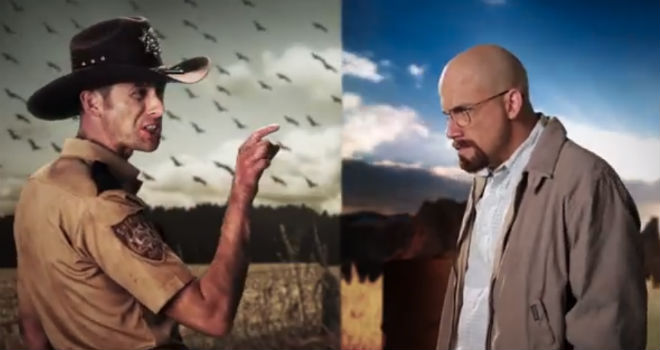 During my usual morning consultation of my email and internet subscriptions, I came across a new video by ERP. In this latest showdown, which is once again pop-culture gold, we get cable TVs most popular fathers – Rick Grimes of The Walking Dead and Walter White of Breaking Bad. What better way to generate comedy than to match up a post-apocalyptic dad who was forced to kill his wife’s reanimated corpse, and a chemist who began cooking meth to ensure his family’s future and then became a ruthless kingpin?

And as usual, Nice Peter and EpicLLOYD are just awesome in their roles! Seriously, they just BECOME whoever they’re imitating. Enjoy! 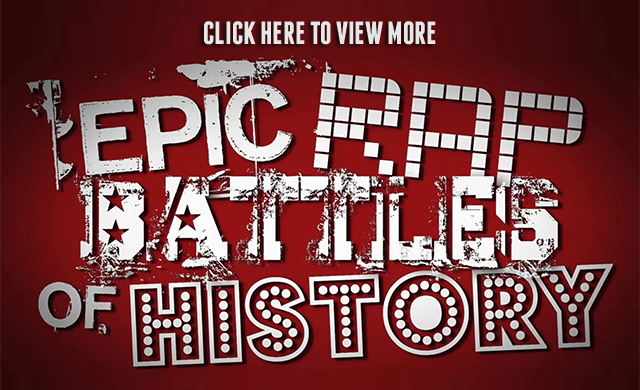 My favorite rap/history crossover spoofers are at it again, this time with a rap battle that perfectly captures the spirit of the holidays. Well, sort of. In any case, we have Donald Trump rapping against Ebeneezer Scrooge, a confrontation of curmudgeony capitalists, which then turns into a bit of a tribute to Dicken’s A Christmas Carol.

Hope everyone is having a happy, safe and enjoyable holiday season, with plenty of fun, family, and some decent swag! Enjoy!

Welcome to the third and final compilation for Epic Rap Battles of History. After covering science and science fiction, I thought it was high time I wrap things up by honoring the historical aspect of the comedy troupe. After all, one of the things that makes these set ups funny is the way they weave fact with unadulterated silliness to make people laugh.

And so, here are the top picks for their rap battles that were truly historical and satirical. Granted, not all of the characters featured here are real, some are historical and/or cultural constructs, and some are just the product of a famous sci-fi geek’s imagination. But I think you’ll agree that it still counts!

Round two for Epic Rap Battles! This time around, I figured I should do a compilation of all their best sci-fi battles, arranged in alphabetical order. These include Batman vs. Sherlock Holmes, Darth Vader vs. Hitler (1 and 2), Doc Brown vs. Doctor Who, and finishes off with the classic Master Chief vs. Leonidas.

Doc Brown vs. Doctor Who:

It occurs to me that I really haven’t given the ERB site its due over the years. They’ve provided me with endless hours of enjoyment and all I ever did was post about one of their videos. Granted, I have nowhere near the kind of following that would needed to actually give their traffic a shot in the arm, but it’s the thought that counts!

And so I thought I’d a little compilation here of some of their funniest, and educational, videos. Whether it was the match ups between Steve Jobs and Bill Gates (made shortly after Jobs death as a tribute to his life), Einstein and Stephen Hawking, or Thomas Edison and Nikola Tesla, these guys have shown a real commitment to their art and are clearly willing to do their homework!


Thomas Edison vs. Nikola Tesla:
Note: Though I am well aware of their existence, I have assiduously avoided posting the videos of Darth Vader vs. Adolph Hitler. Though I found them hilarious, such material is bound to offensive to some. Although, if people were willing to give me permission… 😉 😉

You know what I learned recently? I am ALL about Epic Rap Battles of History! It was months ago when a fellow blogger (Thanks Dave DeMar) put me onto them with their Darth Vader vs. Hitler rap. Admittedly, that one had some humor which could be a little hard to take, especially if you mind such things as thinly veiled references to Hitler’s genocide. However, I’ve found they do just about everyone, from beloved historical figures to pop-culture icons. And there confrontation between the Master Chief and Leonidas was damn near hysterical! Check it out: