Stem cell research has been expanding impressively in recent years, and the range of applications has been growing accordingly. And while all are impressive and useful, some are – admittedly – odd and even a tad gross. One such application is the one that was recently unveiled in China, where a team of biologists are using stem cells harvested from human urine to grow structures in mice that resemble teeth.

The team, led by Duanqing Pei and Jinglei Cai from the Guangzhou Institute of Biomedicine and Health, had announced back in 2011 that it had successfully reprogrammed skin-like cells from the kidneys, found in urine, to turn into pluripotent stem (iPS) cells. As researchers have known for some time, these iPS cells can be tweaked to become pretty much any human cell in the body.

In a paper produced by the Guangzhou biomedical team – which appeared in the peer-reviewed, open access journal Cell Regeneration last week – they claim the ability to “regenerate teeth with patients’ own cells” is an “ideal solution” to the loss of teeth through accidents or disease. As just one of many applications of stem cell research, the aim is to create synthetic biological tissues that can replace artificial implants.

Once the cell sheets formed into epithelial tissue – the kind of cells found in human skin and teeth – they implanted them with tissue from the jaw of a mouse embryo (to encourage it to grow into a tooth) in the kidney of a mouse. Three weeks later, they noted that the human tissue had turned into cells called ameloblasts that secrete enamel, the hard, bone-like substance on the outside of the tooth. 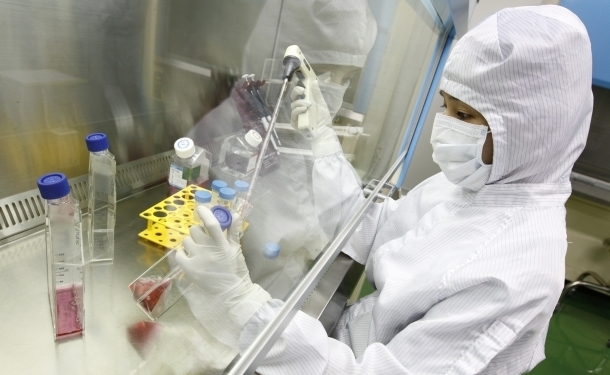 The result was a series of tooth-like structures which possessed the hardness “found in the regular human tooth”, which were then harvested. Assuming that this approach could be scaled to involve dozens of mice across thousands of labs, artificial teeth could be mass produced and then be made available to dental clinics all over the world.

However, the real innovation came with the new method that the research team devised to get around some flaws in the traditional method. This method, which involves inserting the stem cells into blanket cells via a genetically engineered retrovirus, can lead to a destabilization of the cell genome, rendering the tissue unpredictable, susceptible to mutations and thus a liability.

Hence why Pei and his team opted for another route, one which they claim presents a safer, faster alternative. Having extracted kidney epithelial cells from the urine of three donors, the team used vectors — a type of DNA molecule useful in transporting genetic information from cell to cell. This allowed them to transport the genetic information without having to integrate the new genes into the chromosome of the kidney cell.

According to their paper, this process may be partly responsible for the aforementioned mutations in the first place. And once they tested out their new process, it took only 12 days for the pluripotent stem cells to form in a petri dish – roughly half the time it takes using the traditional approach.

William Stanford – a University of Ottawa researcher who holds a Canada Research Chair in integrative stem cell biology – indicated that their approach is not entirely now. Growing various kinds of human tissues inside a mouse kidney is a common technique used by stem cell biologists, Stanford said. In the course of doing so, researchers will occasionally grow what looks like teeth by accident.

However, the Guangzhou team have modified the technique to grow teeth intentionally. And their approach is an improvement in that it does not require skin samples to be harvested by the human subject (a common practice at the moment). Using urine-harvested stem cells only requires that they pee into a cup, and the turnaround time is a matter of weeks instead of months.

Good news for anyone who is missing some chomper, or feels self-conscious about crooked or chipped teeth and can’t afford those expensive, porcelain implants. What’s more, teeth are really just the tip of the iceberg. In time, other organic tissues could be grown as well, allowing for further developments in the already exciting field artificial organ generation.

9 thoughts on “The Future is Weird: Human Urine used to grow Teeth?!”