With every passing year, interest in solar power has been growing by leaps and bounds. Given the impacts of Climate Change, widespread droughts, tropical storms, wildfires and increasing global temperatures, this should not come as a surprise. But an equally important factor in the adoption of clean energy alternatives has to do with improvements that are being made which will make it more efficient, accessible, and appealing to power companies and consumers.

Three such recent developments come to us from Standford, MIT, and the Neils Bohr Institute, respectively; where researchers have announced new ways using nanoprocesses to boost the yield of individual solar cells. In addition to cutting costs associated with production, installation, and storage, increasing the overall electrical yield of solar cells is a major step towards their full-scale implementation. 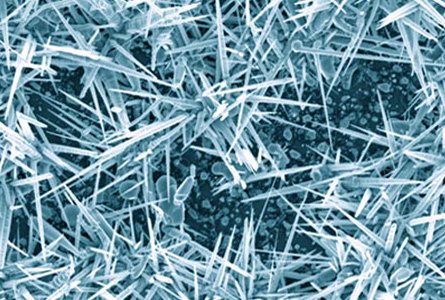 First, there’s MIT’s new concept for a solar cell, which uses nanowires to massively boost the efficiency of quantum dot photovoltaic cells. Quantum dots – which are basically nano-sized crystals of a semiconducting material – are already being considered as an alternative to conventional silicon cells, since they are cheaper and easier to produce.

However, until recently they have been a letdown in the efficiency department, lagging significantly behind their silicon counterparts. By merging zinc oxide nanowires into the design of their quantum dot photovoltaic cells, the MIT researchers were able to boost the current produced by 50%, and overall efficiency by 5%.  Ultimately, their goal is to get that up to 10%, since that is considered to be the threshold for commercial adoption.

Meanwhile, researchers at the Niels Bohr Institute in Denmark and EPFL in Switzerland announced that they have built solar cells out of single nanowires. In this case, the process involved growing gallium-arsenide (GaAs) wires on a silicon substrate, and then completing the circuit with a transparent indium tin oxide electrode, which are currently employed in the creation of photovoltaic cells and LEDs on the market today.

Prior to these development, nanowires were being researched mainly in conjunction with computer chips as a possible replacement for silicon. But thanks to the combined work of these researchers, we may very well be looking at solar cells which are not only hair-thin (as with the kind being developed by Penn State University) but microscopically thin. And much like the research at the University of Oslo involving the use of microbeads, this too will mean the creation of ultra-thin solar cells that have a massive energy density – 180 mA/cm2, versus ~40 mA/cm2 for crystalline silicon PVs.

And last, but not least, there was the announcement from Stanford University of a revolutionary new type of solar cell that has doubled the efficiency of traditional photovoltaic cells. This new device uses a process called photon-enhanced thermionic emission (PETE) that allows for the absorption of not only light, but heat. This combination makes this new type of cell the equivalent of a turbocharged solar panel!

In conventional cells, photons strike a semiconductor (usually silicon), creating electricity by knocking electrons loose from their parent atoms. The PETE process, on the other hand, uses the gallium arsenide wafer on top gather as much sunlight as possible, creating a lot of excited electrons using the photovoltaic effect. The underside, which is composed of nanoantennae, emits these photoexcited electrons across a vacuum to the anode with gathers them and turns them into an electrical current.

Beneath the anode is a of heat pipe that collects any leftover heat which could be used elsewhere. One of the easiest applications of PETE would be in concentrating solar power plants, where thousands of mirrors concentrate light on a central vat of boiling water, which drives a steam turbine. By concentrating the light on PETE devices instead, Stanford estimates that their power output could increase by 50%, bringing the cost of solar power generation down into the range of fossil fuels.

Though there are still kinks in their design – the cell has a very low 2% rate of energy efficient thus far – the researchers at Stanford are making improvements which are increasing its efficiency exponentially. And although their planned upgrades should lead to a solar cell capable of operating in extremely hot environments, they stress that the goal here is to build one that is capable of gathering power in non-desert environments, such as Spaced-Based solar arrays.

Combined with improved production methods, storage capacities, and plans to mount solar arrays in a variety of new places (such as on artificial islands), we could be looking at the wholesale adoption of solar power within a few years time. Every day, it seems, new methods are being unveiled that will allow Solar to supplant fossil fuels as the best, cheapest and most efficient means of energy production. If all goes as planned, all this could be coming just in time to save the planet, fingers crossed!

2 thoughts on “Powered by the Sun: Nanotech Solar Cells”